19 Facts about Betty White On Her 98th Birthday

Betty White, born on January 17, 1922, in Oak Park Illinois, is one of the most iconic figures in the history of the entertainment industry in the United States. Today, the Emmy Award-winning actress and comedian, with more than 70 years of experience in this sector, turns 98 years old and to celebrate her anniversary we've prepared some facts about her life that you would like to know: 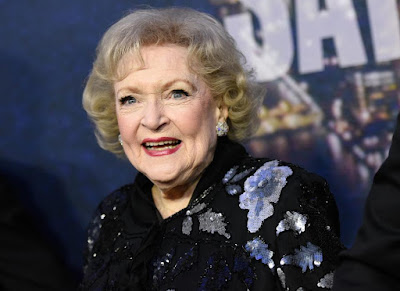 1. She was born as Betty Marion White. Her parents were Christie Tess, a homemaker with Greek roots, and Horace Logan White, an electrical engineer of Danish background.

2. During the Great Depression, her family moved, like many others, to Los Angeles in The Golden State. There, he attended Beverly Hills High School, a popular location that had been already used in many movies, such as "It's A Wonderful Life" or "Clueless."

3. As a teenage girl, she wanted to become a forest ranger. However, she soon focused on different approaches as women weren't allowed to work as forest rangers in those years.


4. She was the playwriter and leading character in a graduation play at Horace Mann School, in Los Angeles. From that moment, she knew that her truly real vocation was acting.

5. Her career on television began in 1939 when she appeared on an experimental local LA channel, singing songs from "The Merry Widow."

6. Her beginnings in the entertainment industry were tough. She was often rejected while looking for jobs as an actress because the movie studios found her "unphotogenic." Eventually, she got a job in a local radio broadcasting channel where she wouldn't have any problems with being unphotogenic, as they told her.

8. In 1949, she began working as a co-host on the daily live television variety show called "Hollywood on Television," hitting the idiot box for the first time.

9. In 1952, she was awarded a Regional Los Angeles Emmy for her role in the television comedy "Life with Elizabeth," co-owned by White herself.


10. She produced her own TV talk show "The Betty White Show" in 1954. The show aired at a time when racism was still very prevalent in American society and it became quite controversial for the appearance of an African-American man called Arthur Duncan. NBC decided to put an end to White's show at the end of that same year.

12. In 1985, she got her most famous role up to this day as "Rose Nylund" on the successful TV series "The Golden Girls." She won an Emmy Award for Outstanding Actress in a Comedy Series after the first season of the show and throughout the subsequent 7 seasons, she would be nominated each year in that same category.

13. In 1995, she is introduced into the TV Hall of Fame. One year later, she would earn her 4th Emmy Award for Outstanding Guest Actress in a Comedy Series for her appearance as herself on an episode of The John Larroquette Show.

14. In 2010, NBC announced that the experienced actress would host the show "Saturday Night Live" after a request from a 550,000 member group on Facebook. Interestingly, before this event, she had never heard of Facebook. When she realized what Facebook was, she said that it was a "huge waste of time." Her appearance in the TV show on May 8, earned White (at the time, 88 years old) the 2010 Primetime Emmy Award for Outstanding Guest Actress in a Comedy Series."

15. In 2010, White was chosen to take the role of Elka Ostrovsky on the sitcom "Hot in Cleveland." She was supposed to appear only in the pilot episode but eventually, she was requested to stay on the show for the entire series, a petition she accepted. This role gave White a nomination to another Emmy Award as Primetime Emmy Award for Outstanding Supporting Actress in a Comedy Series in 2011. However, this time she lost.

16. On February 12, 2012, she won a Grammy for Best Spoken Word Album for "If You Ask Me (And of Course You Won't)." This seems weird, but actually, that Grammy Award category includes books too.

17. In September 2013, Betty White earns the record for "Longest TV Career for a Female Entertainer," after 74 years of hard work in the industry.

18. In 2015, he was awarded the Daytime Emmy for Lifetime Achievement.

19. Up to this day, the actress has an impressive list of achievements: 5 Primetime Emmy Awards, 2 Daytime Emmy Awards, 1 Grammy Award, and 1 Regional Emmy, among many others. She has a star on the Hollywood Walk of Fame, inaugurated in 1995 and placed next to her beloved husband's, Allen Ludden, who passed away in 1981.
Source: KSAT.COM