A Suicidal Man Intentionally Parked His Car On A Train Railroad, Causing A Train To Derail - 11 People Died 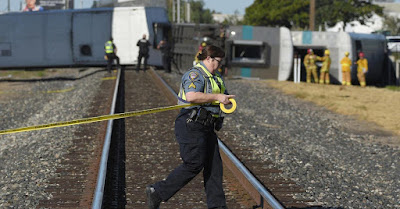 A suicidal man intentionally parked his car on a train railway, causing a Metrolink train to derail and collide, resulting in 11 deaths and 177 people injured.

These events took place in Glendale, California, in January 2005. A man called Juan Álvarez from Compton, California deliberately drove and parked his Jeep onto the tracks immediately south of the Chevy Chase Drive level crossing, in an industrial area north of downtown Los Angeles.

A Metrolink train struck the parked vehicle that had been driven by Mr. Álvarez, pushing the utility car southward along the track until automotive parts hit a track switch and became lodged under the leading car of the train, raising it up and causing the train to derail.

Then, the cars from the derailed train struck the locomotive of a stationary freight train, seconds before several passenger cars caught fire due to a spilled diesel fuel.

The consequences were catastrophic: 11 deaths and 177 injured people.

Mr. Álvarez, who somehow managed to survive was found inside the car with several auto-inflicted cuts on both his wrists and 6 stabs in the chest, facts that corroborate his plan to put an end to his own life.

In the end, he didn't achieve his goal. Instead, he put an end to the lives of 11 innocent people and was immediately arrested and eventually he was sentenced to 11 consecutive life sentences without the possibility of parole.

This incident was the second-deadliest accident in the history of California's commuter rail system, Metrolink.