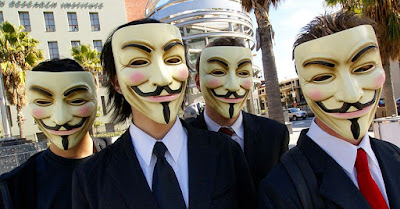 About ten years ago, during the zenith of the Anonymous Movement, a hacktivist decentralized movement aimed to cyberattack online sites owned by governments, powerful organizations, and companies all around the world.

During those first years of the movement, they started to focus on a wealthy and controversial religious organization known as the Church of Scientology.

It all started in 2008 when Gawker Media uploaded a video of Tom Cruise speaking about 'the benefits of Scientology'. For those who don't know what Scientology is, it's a religious belief and a series of practices invented in the 1950s, quite controversial because of the billions of dollars they allegedly have in assets, despite being a "non-lucrative organization," a fact that has made many people think that it is just another way to grab money.

Back to the story, when Gawker uploaded the video, the Church of Scientology was not very happy and demanded Gawker Media to immediately delete the video.

Many people, including members of Anonymous, didn't like the Church's response and the tech-savvies started to chat with each other on the internet, on different IRC chats, 4Chan, forums... to arrange a plan to fuss the Church of Scientology.

Anonymous submitted a video on YouTube a few weeks later, explaining publicly their intentions of "dismantling the Church of Scientology in its present form," the robotic voice from the video said.

Later on, thousands of DDoS attacks by Anonymous caused the main Scientology website to collapse intermittently for several days.

Also, the hackers created what is known as "Google Bomb," which refers to a malicious practice aimed to cause a specific site to rank highly on Google after typing some irrelevant, off-topic keywords. So, they managed to rank the Scientology website to the top when a user typed on Google, "dangerous cult."

Another thing they did was to send thousands of thousands of all-black faxes to the Church of Scientology to deplete all their ink cartridges. Something that didn't affect the organization too much, taking into consideration the number of valuable assets they own.