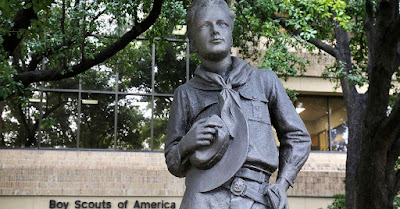 The organization of the Boy Scouts of America (BSA) has transcended the boundaries of the United States. It is a global icon. Its founding motto was "preparing young people to make ethical and moral choices over their lifetimes. It created schools in many other countries as an example of building " the community ".

For 110 years (his founding dates back to 1910) his mission has been, always according to these principles, to educate these children and teenagers to be responsible citizens, confident and aware of the value of nature through outdoor activities.

All these good intentions do not hide the fact that, for many of these Scouts, this joy of life has become a nightmare that has accompanied them in their existence.

In recent years, while the number of official members has plummeted in an era of technological self-absorption, but also of the loss of fear of speaking, another group has emerged that casts a shadow over the original goodwill. It was established by a group of lawyers and named Abused in Scouting. This is not about open spaces but about dark corners.

This group has found more than 2,000 complaints from alleged victims, affecting all states of the Union.

"The BSA cares deeply about all victims of sexual abuse and sincerely apologizes to all those who have been hurt in their time as Scouts," Roger Mosby, the chief executive officer of this institution, apparently not so exemplary, said in a statement Tuesday.
In that statement, it was announced that the Boy Scouts of America, one of the largest youth organizations in the United States, has filed for bankruptcy to deal with the thousands of abuse claims filed against members of this association.

The document was filed in Delaware state bankruptcy court, succumbing to financial pressures, including increased legal fees to address allegations of sexual assault on a collective basis.

In the Texas headquarters database, the organization has identified "at least 8,000 perpetrators. But alleged victims are still showing up and identifying more abusers. "We are outraged that there were times when certain individuals took advantage of our programs to harm innocent children," Mosby reiterated in her text.

The BSA filed the document with the federal bankruptcy court in Wilmington, Delaware. It filed for the so-called Chapter 11, which allows it to continue operating but places the storm of litigation in legal limbo. The intention is to break this dynamic and provide the guidelines for a class-action lawsuit that will facilitate the establishment of a general agreement, under equitable compensation.

All this may lead to them having to sell part of their heritage, consisting of buildings, camps or paths. In addition to lowering the lucrative salaries of their leaders, some of them with an income of $500,000 a year. Court documents list liabilities of up to $1 billion and assets of up to $10 billion.

Bad times to be a Scout. This is the worst conclusion. Your prestige of the past is more than damaged. The Boy Scouts have had to find ways to cope with their declining influence among American children. Today it has 2.4 million participants in its programs, only half its peak in the 1970s.

In recent years, the organization has changed the requirements for membership. Gay participation was approved in 2013. In 2015 this regulation was applied to leaders and in 2017 the doors were opened to girls.

No measure has prevented the increase of legal pressure and decline.