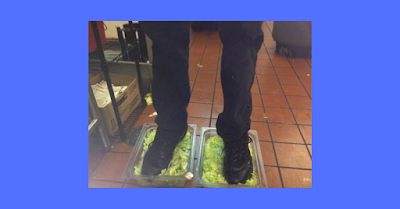 A man anonymously posted a photo on the famous site 4chan on July 19, 2012. In the photo, users of the site could see a section of the guy's legs, his feet, some cardboard packages behind and two plastic boxes filled with what seemed to be lettuce.

The controversy came because the man was literally putting his feet in the lettuce, proclaiming: "This is the lettuce you eat at Burger King." In other words, he was stepping in the lettuce that hundreds of customers of the famous fast-food chain would later eat.

He was so convinced that his photo was completely untraceable that he didn't care about the people who were to see the public picture. But how wrong he was...

10 minutes after posting it, a user noticed that the publication's Exif data pointed to Mayfield Heights, Ohio. Just 2 minutes later, another user published the address of the Burger King branch in which the man put his feet in the juicy lettuce, wishing him a "happy unemployment." 17 minutes after the original publication, a user contacted the news and many others decided to contact Burger King through the 'Tell us About us' form, attaching the controversial and disgusting photo.

The next morning, news channels like Cleveland Scene Magazine or Fox 8 News ate entirely that story and the news quickly spread throughout the internet. That same morning, Burger King's Manager of Global Communications announced the termination of the employee, the author of the post.