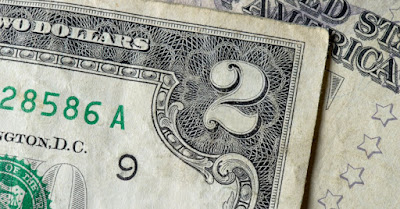 Among all denominations of the U.S currency, there is one that especially stands out for its scarcity. Some may think it is the $100 bill but, in fact, this bill is the most abundant legal tender comprising 77% of all US currency circulation. Well, it is the $2 bill.

The $2 bill is very interesting mainly because it represents just 1% of all U.S currency in circulation. The bill's obverse features the image of Thomas Jefferson while the reverse shows an old engraving of the Declaration of Independence.  It is so rare that many people in the country would say that a real $2 bill is a fake one. If you don't believe this, ask eighth-grader --at the time when the events took place-- Danesiah Neal.

8-year-old Danesiah was gifted with a $2 bill from her grandmother, Ms. Joseph, and she decided to buy some chicken nuggets with it, at her school's cafeteria, in Houston, Texas, on April 2016.

She was waiting for her crunchy nuggets when school officials suddenly told her that her bill had been confiscated because it was fake. The eighth-grader would later tell ABC News: "I went to the lunch line, and they said my $2 bill was fake. They gave it to the police."

From then on, things would gradually become worse and worse for the young student.

Soon, police officers appeared on the scene and they said to Danesiah that she had to be sent to the nearest police station. "A police officer said I could be in big trouble," said Danesiah.

In fact, being accused of using a counterfeit bill is no joke. Under federal law, a person who intentionally uses counterfeit money can be sentenced up to 10 years in prison.

The news was soon communicated to Danesiah's grandmother, Ms. Joseph. "Did you give Danesiah a $2 bill for lunch," the school officials asked her. "The bill is fake," they added.

Soon, a police investigation was opened and officers discovered that the bill came from a local convenience store, which gave it to Ms. Joseph. Then, the police took the bill and drove to a bank where they were told that, actually, the bill was 100% real. Afterward, they gave back the $2 bill to Danesiah's grandmother.

"They didn't apologize. They should have, and the school should have because they pulled Danesiah out of lunch, and she didn't eat lunch that day because they took her money," said Ms. Joseph in tears to ABC News.

Eventually, no charges were filed and the school and the police have not apologized up to this day (they won't since this event happened 4 years ago).


- A Suicidal Man Intentionally Parked His Car On A Train Railroad, Causing A Train To Derail - 11 People Died