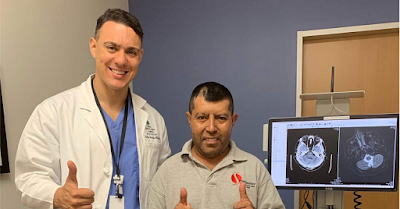 A man from Austin, Texas, suffered from severely painful headaches until he discovered that everything was due to the presence of a kind of tapeworm in his brain and after ten years, finally medical experts managed to remove it, according to local reports.


For more than a decade, the man had been suffering from headaches whose effects gradually increased in intensity, causing him to vomit and faint.

The man attended Ascension Seton Medical Center in Austin where he had an MRI scan and doctors were able to find several tapeworm larvae of considerable size (a few inches long,) which were hosted in his brain.

The Texas man would have contracted the infection while eating raw, inadequately cooked or contaminated food. This rare infection is known as "neurocysticercosis." Eventually, he was immediately assisted and the experts managed to extract the parasite successfully.


His headaches stopped and he started to work again. According to the CDC (Centers for Disease Control and Prevention) from Atlanta, Georgia, around a thousand cases are diagnosed every year in the United States.

Normally, larvae get into the body after eating raw pork meat, contaminated dirt or after drinking unsafe water, among others.