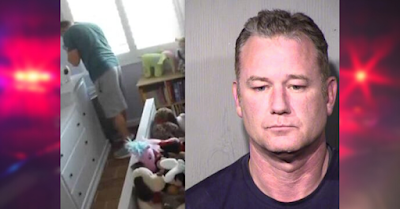 Deputy U.S Marshal David Moon, 50, was just touring a house in Phoenix for sale. When his real estate agent was somewhere else, Moon seized the opportunity to enter into a 3-year-old girl's bedroom, according to local authorities.

Once in the bedroom, he started looking around when something caught his attention in one of the room's corners, a laundry basket. Then, he proceeded to dig through the dirty clothes and pulled out what seemed to be the preschooler's underwear.

ABC15 Arizona uploaded the original footage on its website which clearly shows how the agent holds the underwear close to his nose for a few seconds.

After that, he left the girl's room and a few minutes later he got in the same room for a second time to continue with his deplorable act. But, unfortunately for him, this time when leaving the room he noticed the nanny cam on the wall, covered his mouth and said: "Goddamnit!"

The footage was automatically sent to the little girl's father who became terrified when he saw the recording for the first time, ABC15 Arizona stated.

After the allegations against Moon were made public, the deputy lost his badge and got arrested. Moon was originally indicted on two charges of felony and trespassing with sexual motivation but he made a plea deal for one count of regular trespassing, a misdemeanor.

The father, shielding his identity due to the nature of the crime, asked the court to order sex offender counseling for David Moon or at least require a psychosexual examination. The judge said "no" to the father's demands. Instead, she ordered Moon to serve two years of probation, unsupervised, in Texas, where the former deputy is now living.

According to ABC15, in two years Moon could apply for this conviction to be set aside, meaning that it would show the trespassing charge was dismissed.

If you want to take a look at the footage, click on the source link just below.