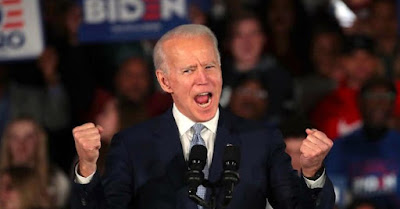 After Biden's victorious Super Tuesday night, the Democratic race to the presidency now seems much more certain. Former vice-president, Joe Biden was the ultimate winner on Super Tuesday: he won 10 of the 14 states at stake that night, leading the democratic primaries and surpassing socialist Bernie Sanders. Super Tuesday also led to dramatic consequences for the rest of the candidates: Elizabeth Warren, Michael Bloomberg, Pete Buttigieg, Amy Klobuchar... all of them dropped out from the presidential race after seeing no chance of winning the primaries --well, except for one, Tulsi Gabbard, but it seems she is going to do the same in the next couple of weeks.


This basically means that the next democrat who will have to face President Trump in the 2020 Presidential Elections will be either Biden or Sanders.

Joe Biden's celebration speech that night in front of a small crowd in California was seen by lots of Americans, including psychiatrist Dr. Gertrude Williams, who is very worried about the current situation in the democratic party. Williams has recently spoken to online news site Daily Wire, discussing the mental state of the two main candidates, Sanders and Biden.

"I don't usually evaluate in public the mental health of prominent and influential figures, but in this case, I morally felt the necessity to speak it all out," said Dr. Williams, with more than 40 years of experience behind her. Dr. Williams has identified a series of signs and patterns in Biden's behavior after analyzing more than one hundred of Biden's speeches and other public appearances since he officially presented his candidacy for the 2020 elections on April 25, 2019.

Some of these signs include delusions of grandiosity, omnipotence, impunity, and pathological lying to the level where almost no truth could be found in any of his words.


"When I read the examination I wrote on Joe Biden's mental health for the second time, two words popped up in my mind: 'Malignant Narcissism'." According to Wikipedia, "malignant narcissism" is a psychological syndrome comprising an extreme mix of narcissism, antisocial behavior, aggression, sadism, and grandiose taken always to hostility levels.

According to Dr. Williams, Biden would definitely constitute a real danger to this country in the hypothetical case that he wins the presidency.

"Throughout history, many American Presidents have suffered from different mental disorders. For instance, Abraham Lincoln suffered from depression; Teddy Roosevelt showed signs of a mild bipolar disorder during his mandate.

"However, this is different," remarks Dr. Williams. "Malignant narcissism makes the people who suffer from it potentially dangerous to others. It is more similar to delusional schizophrenia than it is to anxiousness," adds Dr. Williams.

"A person in power with malignant narcissism is likely to get others killed or harmed and that is very scary," concludes 64-year-old Gertrude Williams.


Now, we have to add this psychological analysis to Biden's prominent racism, a claim that has been reinforced by a series of statements against black people and minorities the former vice-president has made during his 2020 presidential campaign.

"Poor kids are just as bright and just as talented as white kids," said Biden during a town hall hosted by the Asian & Latino Coalition. Biden also stated during the last democratic debate in South Carolina: "A kid coming from a very poor school, a very poor background will hear 4 million words fewer spoken by the time we get there, so black parents should play records at night to 'make sure that kids hear words'."