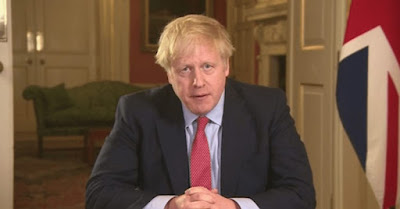 
Boris Johnson has tested positive for coronavirus, it was announced today.


UK Prime Minister Boris Johnson, 55, has tested positive for the coronavirus, the British government Office has confirmed. Johnson himself explained in a video how he had begun to show mild symptoms of the disease in the last 24 hours. He is isolated, on the advice of the Executive's medical director, Chris Whitty, and says he will continue to monitor the situation from his home.

Johnson thanked the more than 600,000 volunteers who have volunteered with the National Health Service (NHS) in the video and again thanked the citizens who are following the social distancing measures imposed by their government. If Johnson's health deteriorated, it would be Foreign Minister Dominic Raab who would take over the reins of government.

UK Health Minister Matt Hancock (41) has also used the social networking site Twitter to confirm that he has tested positive for the coronavirus. "I've been working at home for days and I've started having mild symptoms. The test came back positive. I will stay isolated until next Thursday and continue working from home," he explained in a video.

Hancock has been one of the members of the Johnson administration who has put the most pressure on the drastic measures that other countries had already implemented to be imposed in the United Kingdom as well.

Johnson's current partner, Carrie Symonds (32), is about six months pregnant. Downing Street has explained that she is being kept isolated, at a different address from her husband. Although pregnant women are no longer susceptible to the virus, pregnancy can alter the immune system and the general response to a viral infection.

Finance Minister Rishi Sunak has spent many hours with Johnson in recent days. On Thursday, at 4 p.m (ET) he appeared beside the Prime Minister at the door of Downing Street to applaud the NHS workers. For the time being, he has announced, he will not take any isolation measures or undergo the test unless he shows symptoms of the disease. Johnson was due to appear at another press conference on Friday but the event has been suspended.

After a slow and confusing first response, the prime minister decided last week to make a dramatic turnaround in the UK's strategy in the fight against the coronavirus. British citizens must now remain under house confinement, and the only exceptions are going out to buy food supplies, medical needs, take a daily exercise break or go to work if teleworking is not possible.

Continue reading on THE SUN >>