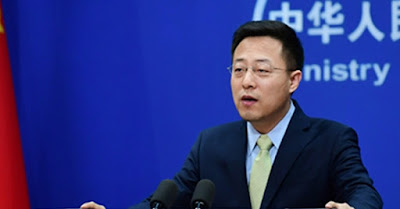 A spokesman for the Chinese Ministry of Foreign Affairs has suggested that the US military brought the coronavirus to the Chinese city of Wuhan, which was the most affected by the outbreak, reinforcing with his words the dialectical war with Washington.


China has been deeply offended by comments from US officials accusing it of reacting slowly to the virus, first detected in Wuhan late last year, and of not being transparent enough.

On Wednesday, US National Security Adviser Robert O'Brien said the speed of China's reaction to the appearance of the coronavirus had probably cost the world two months when it could have been preparing for the outbreak.


"When did patient zero begin in US? How many people are infected?" Zhao wrote on Twitter. "What are the names of the hospitals? It might be US Army who brought the epidemic to Wuhan. Be transparent! Make public your data! US owe us an explanation!"

Zhao, who is quite active in this social network, offered no evidence of his suggestion that the US Army is to blame for the outbreak in China.

Just this Thursday, another Foreign Ministry spokesperson, Geng Shuang, criticized US officials for "immoral and irresponsible" comments blaming Beijing's response to the coronavirus for worsening the global impact of the pandemic.

When asked about O'Brien's remarks, Geng told a press conference in Beijing that such comments by U.S. officials would not help the epidemic effort.


Geng, asked repeatedly about Zhao Lijian's comments, said the international community had differing ideas about the origin of the virus that has already infected more than 100,000 people and killed nearly 5,000 worldwide.