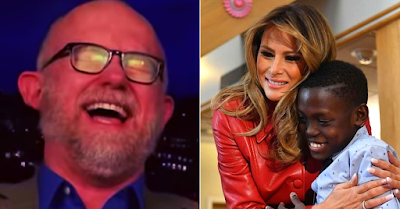 Rick Wilson is, without a doubt, a very interesting character. He addresses the studios of television networks, such as CNN or MSNBC, and presents himself as a "Republican consultant," being anything but a true Republican.


We're talking about a person who has written books like "Everything Trump Touches Dies" in which he harshly criticizes the measures taken by the Trump administration, or "Running Against the Devil: A Plot to Save America from Trump," a book that received good reviews from news sites such as, of course, the New York Times, MSNBC, or CNN, where he compares Trump to the devil himself.

This gentleman, who has been visiting different TV studios lately to basically criticize everything President Donald Trump does, is also the co-head of the Lincoln Project, a "conservative" project that aims to kick out Donald Trump from Office.

You may recognize him from a series of controversies he starred in, such as when he appeared as a guest on Don Lemon's CNN show, CNN Tonight, in January, in which Wilson mocked the intelligence of the president's supporters, while Lemon and another guest laughed compulsively.

However, it seems that the career of this "Republican strategist" is going to be severely damaged after responding to an announcement published by his friends at CNN.


On Wednesday, the White House announced that the First Lady was planning to appear in a series of public service announcements aimed at educating the American population about the different habits that can be adopted to reduce the chances of COVID-19 contagion, a virus that has already killed 11,904 people so far, and whose spread seems to be unstoppable.

According to CNN, the White House announced that Melania Trump would emphasize "important ways Americans can protect themselves and those in vulnerable groups, such as children, the elderly, or people with pre-existing health problems.

Following these statements, Rick Wilson took the opportunity to respond in the vilest and most despicable way one could imagine.

Using the name of Melania's anti-bullying campaign, "Be Best," Wilson responded on Twitter to CNN's announcement by simply typing the hashtag #BeInfected, wishing Coronavirus infection on the First Lady, which is certainly no joke.

And, of course, it didn't take long before users of the platform started criticizing Wilson's tweet from both sides of the political spectrum:

"Author Rick Wilson Wishes Coronavirus Infection on First Lady Melania Trump. If you could say one thing to rick, what would it be?" published Twitter user @ChuckCallesto.

"This is the most insidious & hateful rhetoric of anyone who exists in political punditry. Rick Wilson is wishing Coronavirus on Melania Trump. It doesn't matter if the wish is aimed at a First Lady, or a doctor, a teacher, a policewoman. It is despicable. He deserves no platform," said user @JoeConchaTV

This is the most insidious & hateful rhetoric of anyone who exists in political punditry. Rick Wilson is wishing Coronavirus on Melania Trump. It doesn’t matter if the wish is aimed at a First Lady, or a doctor, a teacher, a policewoman. It is despicable. He deserves no platform. https://t.co/uTr5RVZSTX
— Joe Concha (@JoeConchaTV) March 19, 2020


What about you guys? If you had to answer Wilson, what would you say to him?