Cuomo to Trump: "80% Will Get Virus. Do Something Now or We'll Kick You Out of Office" 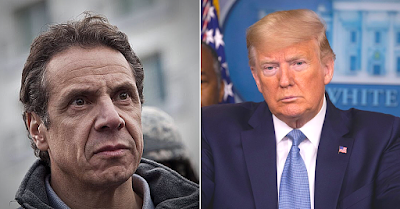 New York Governor Andrew Cuomo has warned that 80% of the population of the state of New York could become infected with the coronavirus and added that this crisis could last until Christmas, according to the English journal The Sun.


Cuomo made this statement hours after Treasury Secretary Steve Mnuchin warned of the possibility that the lockdown, which is currently affecting 80 million Americans, could last up to 12 weeks.

During the press briefing, Cuomo also strongly criticized those groups of people who continued to lead normal lives, socializing or leaving their homes unnecessarily instead of staying home to stop the increase in the number of new cases of contagion.

The governor of New York announced that he had just ordered the deployment of officers from the New York City Police Department to control the crowds on the streets and remind people of their responsibility to stay confined to their homes.


Cuomo also devoted much of his appearance to discussing the duration of these measures and the severity of the crisis, arguing that it is quite likely that approximately 80% of the state's population will end up contracting the virus and, moreover, this crisis situation could last until Christmas.

"But 40 percent up to 80 percent of the population will wind up getting the virus."

"All we're trying to do is slow the spread, but it will spread, it is that contagious. It is going to be four months, six months, nine months... It's in that range," added the governor of the state with the highest number of coronavirus cases reported so far in the nation: 15,168 total cases and 122 fatalities, well above the second-most affected state, New Jersey, which has reported 1,914 COVID-19 positives and 20 deaths so far.

Cuomo also said he had asked the federal government to urgently produce medical equipment to be able to deal with the growing number of coronavirus patients, as well as to set up four federal hospitals in Javits Center, Manhattan.

"We are also going to ask FEMA (Federal Emergency Management Agency) to come in and erect 4 federal hospitals at the Javits Center."

He told reporters that the state of New York currently disposes of 53,000 hospital beds, but that they would need a minimum of 110,000 to prevent a collapse of the hospitals.


The governor also asked President Donald Trump to invoke the Defense Production Act, which forces manufacturing industries to also produce medical equipment to help mitigate the impact of the virus.

Although last week Andrew Cuomo himself had praised the president's efforts to fight the virus, Cuomo now decides to go on the defensive, accusing Trump of "not willing to lift a finger to help the state of New York and the United States as a whole.

On Sunday, Trump responded to Cuomo by saying that many of the nation's largest factories are beginning to manufacture medical equipment.

Trump tweeted: "Ford, General Motors and Tesla are being given the go ahead to make ventilators and other metal products, FAST!

The president then added: "Go for it auto execs, lets see how good you are?"

Ford, General Motors and Tesla are being given the go ahead to make ventilators and other metal products, FAST! @fema Go for it auto execs, lets see how good you are? @RepMarkMeadows @GOPLeader @senatemajldr
— Donald J. Trump (@realDonaldTrump) March 22, 2020