Dems: "Trump Is Responsible For The Current Coronavirus Outbreak" 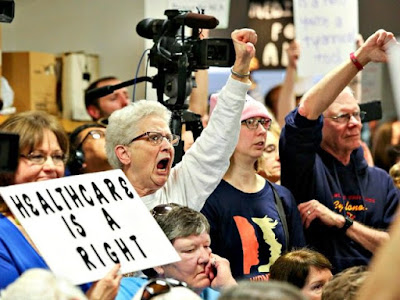 Sean Hannity criticized the Dems and the media for using the coronavirus outbreak as a "weapon" to attack President Trump, saying such speech is unfair to the president.

"The crowd in the media, the Democrats. What are they doing? I want to use a deadly virus as a political weapon against the president,' apparently supporting this as 'Trump's Katrina,'" Hannity said on her television show. "They want you to believe that the spread of the coronavirus is the president's fault and that he's not doing enough to protect the American people.


After giving a quick summary of how the virus had spread throughout the country and the responses made by the Trump administration this week regarding this crisis, Hannity mentioned the gravity of the situation Americans are now facing.

"Coronavirus is very serious. They should be informed of the real risks and dangers as with the flu, as with any virus, as with any pandemic," Hannity said. "This is not the first major pandemic - a possible pandemic - to impact the United States. Well, we've been impacted much less, fortunately, than other countries, but we want a cure for everyone.

"The world is not ending. It's not the president's fault. When the president put the travel ban into effect, the fake CNN said, "We're going to stigmatize other countries.  Joe Biden said the president is xenophobic," Hannity said. "Well, we have other news. They've been predicting the downfall of our economy. It's not happening either."


"The media hype, militarization, and politicization of this serious issue is more than predictable and shameful," Hannity said earlier in his monologue.

This is quite embarrassing considering that President Trump has just signed an $8.3B spending bill to retain and stop the expansion of the outbreak. "We're doing well, but it's an unforeseen problem," said President Trump while signing the document at the White House's Diplomatic Reception Room.


Vicepresident Pence has also talked about this issue on Twitter, stating that "the passage of an almost $8 billion funding bill by Congress shows that not only is this a whole of government response, but it's a whole of America response to the Coronavirus."

This article was originally posted on Fox News. See the original article here.