German Researchers Prove There Is Life After Death 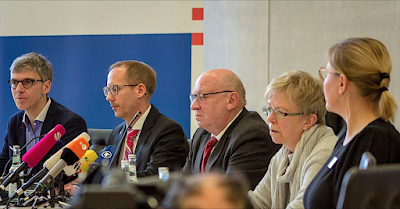 Aachen, Germany -- A team of researchers at the Universitätsklinikum in Aachen, Germany, near the border with Belgium, has just announced this morning during a press conference the shocking results of their study, carried out over the last six years.


"According to our latest research, life after death actually exists," the head of the study, Prof. Dr. Hanns Heiliger, declares. The conclusions were based on a study where researchers have used for the first time in history a process to clinically induce and monitor near-death experiences, allowing patients to be clinically dead for roughly fifteen minutes before being reanimated and brought back to life.

This controversial approach has been conducted on 1,050 people, from all ages and geographical locations. Among them, there were members of Christianism, Islamism, Judaism, Hinduism, and atheists, an important fact considering the nature of this study.

During the procedure, participants were given a complex cocktail of drugs, including hydrobromide and epinephrine (another term for 'adrenaline') among others. This cocktail, dosed differently depending on several factors, such as age, sex or weight, is designed to send patients to a "clinical death" state, allowing them to survive without suffering any physical or psychological damage.

"The body of the subject was to put the patients into a temporary comatic state induced by a mixture of other drugs which had to be filtered by ozone from their blood during the reanimation process twelve minutes later," Dr. Heiliger clears out.


This couldn't be possible without the help of a medical device called "Cardiopulmonary Resuscitation Machine" or simply CPR Machine, called 'AutoPulse.' This type of machine has been used in the medical field for the last two decades to reanimate people who had been dead for more than forty minutes.

Once the procedure was conducted on each of the 1,050 volunteers, a group of specialized psychologists proceeded to analyze the testimonies of all participants, one by one, an "extremely tedious task," Dr. Heiliger claimed during the morning press conference. The conclusions were quite revealing:


"Most common memories included a feeling of detachment from the body or 'dissociation', feelings of levitation, absolute serenity and blissful apathy, security, warmth, and the presence of an overwhelming light."

Amid the current "coronavirus global alarm," nobody knows exactly how this is going to affect the medical and scientific worlds but we could be talking about one of the greatest medical advances in history, that is for sure. "I'm aware we are going to disturb the beliefs of many people but science now rules," Dr. Heiliger adds.


Now, it seems one of the greatest enigmas in the history of humankind has just been solved. Science has eventually managed to give a rational response to a question that had only been answered according to irrational beliefs up to this date. We can now affirm that "death is not the end and this seems to apply to everyone."