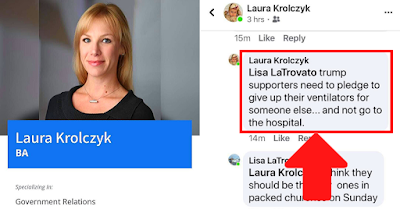 Roswell Park Comprehensive Cancer Center, in Buffalo, New York, has ended up firing one of its top executives for a series of obscene comments addressed to supporters of President Donald J. Trump, amid the coronavirus crisis.


The name of the executive in question is Laura Krolczyk, who was no less than the health center's vice president for external affairs, a position she received given her experience in political matters, working for Hillary Clinton years ago. Krolczyk was fired after an investigation into some comments published on her Facebook account, center spokeswoman Annie Deck-Miller said Saturday.

In addition, Hauptman Woodward Medical Research Institute has placed Lisa LaTrovato, its director of development, on leave for her Facebook commentary exchange with Krolczyk, the Institute told The Buffalo News.

Both institutions acted after Republican Party strategist Michael Caputo uncovered and posted the offensive comments on his Twitter account, which went viral within a couple of hours, drawing a lot of criticism, especially from the right-wing.

But what kind of comments were sent between them exactly? To whom were they addressed?

This whole story began when Krolczyk posted on her Facebook profile a link to an article on The Hill news site that talked about the alleged reluctance of the Trump administration to pay $1 billion to General Motors and Ventec so that these companies could continue manufacturing ventilators to respond to the huge demand from different states around the country.

Krolczyk shared that article, to which he attached a comment: "Vote Trump." LaTrovato responded, "But will waste more than that on a wall and space force."

Krolczyk said, "Trump supporters need to pledge to give up their ventilators for someone else ... and not go to the hospital." LaTrovato said, "I think they should be the only ones in packed churches on Sunday."

Then Krolczyk said, "They should barricade themselves in there and ride this out." To which LaTrovato replied, "Yup."

This public comment exchange, did not go unnoticed, and another user ironically wrote: "Wow, just wow, so your saying we decide who lives and dies based on political views? Great plan (thumbs up emoji)."


But Krolczyk did not remain silent and decided to answer back: "That's literally what he's saying. Take your 'wow' and comprehend what your hero is saying. Your hero is saying YOU don't need a ventilator. So don't take one. Also, don't cash your stimulus check. It's all a hoax. Chew some ibuprofen and be on with your day."

Little did Krolczyk know what would happen in the next few hours. Somehow, Caputo managed to capture the thread of the conversation and then report it on his Twitter account, which has over 37,000 followers.

This was the original tweet posted by Michael Caputo who, as we said, is a political expert and fervent supporter of the GOP:

.@HWMRI @RoswellPark Is it your public health policy to assure Trump voters are infected with COVID?

Why are your senior executives advocating this sick strategy online? For the love of God, you both exist to fight disease!

Shortly after publication, Roswell Park responded that such statements made by Ms. Krolczyk were "inappropriate."

Within hours, the institution added: "This behavior is not tolerated at Roswell Park. If any team members act in a way that does not accord with that commitment, we will take swift and appropriate action, just as we did in this instance.

It appears that the Comprehensive Cancer Center took the matter seriously and within hours and after first being called on leave, Laura Krolczyk was terminated.


"They do not reflect the opinions of Roswell Park or its senior leadership," said Roswell Park CEO Candace S. Johnson.

According to reports published by the SeeThroughNY database, Krolczyk earned the lavish amount of $226,580 last year for the job she has just lost.

It is clear that Krolczyk has learned a great lesson and she will regret such despicable and vile comments for the rest of her life.