Lindsey Graham: "With Trump In Office, We The American People Are Safe" 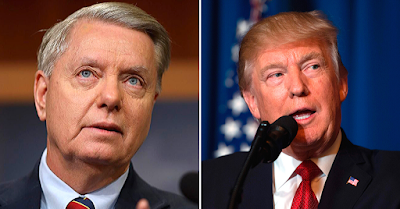 South Carolina Sen. Lindsey Graham said during an interview on "The Brian Kilmeade Show" that President Donald Trump is undoubtedly the "best bet" for a quick and effective recovery of the economy, recently damaged by the coronavirus pandemic.


"President Trump, in my view, fixed a broken economy once, he's the best bet to do it twice," said the Chairman of Senate Judiciary Committee.

Graham also noted the great work that Donald Trump did in his first three years in office, having rebuilt an economy that was going nowhere, a broken economy, a legacy of the Obama administration.

"He's shown his ability to rebuild a broken economy. Who do you want to fix an economy broken by a virus, somebody like Biden or somebody like Trump?" "That's not a hard decision," Graham said.


After attending a dinner at President Trump's Palm Beach Mar-a-Lago residence last weekend, attended by Brazilian President Jair Bolsonaro and his press secretary, who tested positive for the coronavirus, Lindsey Graham was forced to self-quarantine in his home and take the virus test, as recommended by his personal physician. Finally, the test results came out as 'negative'.

The Federal Reserve took urgent action on Sunday to help the country's economy withstand the severe scourge of the coronavirus, lowering its benchmark interest rate to near zero and promising to buy $700 million worth of mortgage and treasury bonds.

The Fed's announcement reflects its great concern that the pandemic will lead to a new economic recession and put an end to 3 years of continuous economic growth, and that it is prepared to do everything possible to reduce the possible risks.


During the interview, the anchor of the show took the opportunity to ask Graham if he had seen Sunday's Democratic debate between Sanders and Biden, and what he thought about it.

"I saw part of it. It's not a hard decision. In my view, the public is gonna look at President Trump's first 3 years and say: 'This is the guy that led us out of economic stagnation. He took a wet blanket off the economy, he got it humming. And along comes, out of the left field, the virus has been a gut flow to the economy -- but, it's not being caused by policy, it's caused by a virus. Once the virus is contained, and eventually, it will, who can rebuild an economy that took a hit? Graham claimed.

"I mean, Trump's got a much better argument that he can rebuild it a second time because we know he did it the first time."