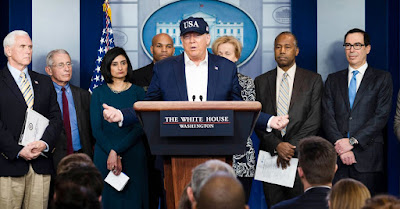 U.S. President Donald Trump told some Republican donors last weekend that he did not care at all that the media were harshly critical of his administration's measures to stop the spread of coronavirus, as long as they did not use it as a tool to win the next presidential election in November.


"We've done good," said Trump to one of the donors gathered at his Mar-a-Lago residence in Palm Beach. "But no matter what we do, it will never be good for the press. Because they're using this to try and win an election."

"They're trying to scare people, cancel meetings, close schools - you know, destroy the country. And that's fine, as long as we can win the election. But I really think that if they saw that the Trump administration is dealing with the coronavirus issue in a professional, competent way, I don't think that's going to hurt us," the president added.

After the meeting in Mar-a-Lago, which was also attended by Brazilian President Jair Bolsonaro, Trump was faced with a flood of questions from the mainstream media about whether he had considered taking a coronavirus test, especially after Bolsonaro's press secretary, who was also present at that dinner in Mar-a-Lago, tested positive for COVID-19.


Fortunately, Trump, who proceeded to take the test to silence the media, ended up testing negative, as confirmed by his personal physician Sean Conley on Saturday evening.