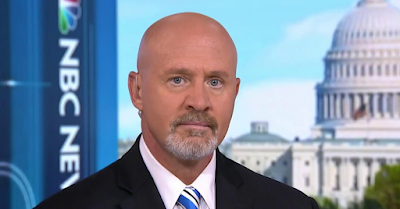 MSNBC analyst Glenn Kirschner expressed Tuesday his intentions to prosecute President Donald Trump for multiple crimes, including negligent homicide and voluntary/involuntary manslaughter, for his alleged inability to deal with the coronavirus pandemic.


Kirschner clearly reflected his opinions and thoughts through a list of public tweets, introducing himself in his first tweet as "an expert on homicide cases" and stating his notion that Donald Trump, since he is doing nothing to stop the pandemic in the country, should be prosecuted for crimes as serious as negligent homicide or voluntary manslaughter.

After this first tweet, Kirschner wrote a second one seconds later in which he bragged about his long experience as Federal Prosecutor in Washington, D.C. and as Chief of the Homicide Section in DC US Attorney's Office, in charge of supervising all the murder investigations in the city.

"I was always on the lookout for novel ways to apply homicide liability in an attempt to appropriately and ethically hold accountable those who were responsible for taking the life of a fellow human being," Kirschner said.

After a long speech about the values he has upheld during his long and dedicated career, Kirschner explained that he is now trying to gather all the evidence at his disposal to determine whether Trump and his administration may have acted in any way that could lead to homicide charges.


From there, he wrote one lie after another, claiming that Trump has already "broken the law several times," accusing him directly of campaign finance crimes, obstruction of justice, bribery, and extortion.

Finally, Kirschner concluded his long string of messages by making it clear that all criminal charges must be investigated very carefully and, if the evidence so indicates, President Trump will have to be prosecuted in January 2021.

But the controversy does not end here. After these publications, a member of the Democratic Party, Mark Judson, who ran as a Democratic candidate for the North Carolina 7th Congressional District -- and lost -- replied to Kirschner on Twitter, providing him with a list that shows a series of figures that correspond to the number of "expected fatalities before Donald Trump" and the number of "fatalities with Trump," concluding that the president is directly responsible for the death of 4,125,000 people.


What were they thinking? All these messages, I repeat, can be accessed by any user and are exposed to the public. From my point of view, this is a despicable and malicious thing to do, this is the most I can say as the administrator of this website.


Hey All. Can we talk about 1 of the few topics I may actually know too much about: homicide? Specifically, whether Donald Trump may have criminal exposure for some level of negligent homicide or voluntary/involuntary manslaughter for the way he’s mishandled the Coronavirus crisis
— Glenn Kirschner (@glennkirschner2) March 17, 2020

I spent 22 of my 30 years as a federal prosecutor handling murder cases in Washington, DC. I served as Chief of the Homicide Section at the DC US Attorney’s Office, overseeing all murder prosecutions in the city. I was always on the lookout for novel ways to apply homicide ...
— Glenn Kirschner (@glennkirschner2) March 17, 2020

liability in an attempt to appropriately and ethically hold accountable those who were responsible for taking the life of a fellow human being. I think it’s fair to observe that there’s nothing more devestating to a family then losing a loved one to ether violent crime or to ...
— Glenn Kirschner (@glennkirschner2) March 17, 2020

an illness that could have been prevented or mitigated. I’m trying to assimilate all available evidence (rapidly developing and being reported every day) to fairly assess whether Trump and his administration may have acted/failed to act in a way that could give rise to ...
— Glenn Kirschner (@glennkirschner2) March 17, 2020

homicide liability. This is not an easy question. Further, whereas the evidence is clear that Trump has committed multiple criminal offenses both before his tenure as president (campaign finance crimes) & during his time as president (obstruction of justice, bribery/extortion)...
— Glenn Kirschner (@glennkirschner2) March 17, 2020

homicide liability by his negligent/grossly negligent (and/or possibly intentional) mishandling of the Coronavirus crisis in the US is a more nuanced and thorny issue and deserves careful consideration. But the homicide liability issue MUST be addressed because ...
— Glenn Kirschner (@glennkirschner2) March 17, 2020

ALL criminal charges will have to be investigated and, if the evidence dictates it, prosecuted come Jan. 2021. Stay tuned ... #TrumpCrimesCommission #TCC #JusticeIsComing
— Glenn Kirschner (@glennkirschner2) March 17, 2020

The calculation looks basically like this. The number infected would also increase as a result of Trump* in addition to the fatality rate.

But this is the base template IMHO. pic.twitter.com/0Spr1GgCRo
— Mark Judson For Congress (@Judson4Congress) March 17, 2020