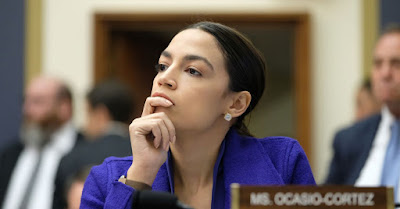 It is nothing new to say that Dems are trying to politicize the recent coronavirus outbreak in an attempt to push and spread false information on socialist measures.


That is the case with Rep. Alexandria Ocasio-Cortez (D-NY) also known as "AOC" a very well known politician on both sides of the U.S political spectrum for her controversial public statements. In October 2019, the congresswoman told Queens' local reporters that she was in favor of jail abolitionism, claiming that "she didn't want to see other people moved to boats or barges or being caged."

Yesterday, AOC published a now-controversial tweet, just moments after the announcement by the Federal Reserve that it was injecting $1.5 trillion to back banks to help relief the coronavirus' crisis. According to AOC, this announcement proved that the government can cancel all student debt collections and apply other socialist rules to "help the working class."

As she explains on her Twitter account, if the government has just spent $1.5 trillion to back banks in response to this coronavirus outbreak, there is no excuse for not pausing student debt and applying other measures like planning mortgage or rent relief.


The problem with this statement is that... it actually makes no sense and many members of the democratic party have already criticized it. New York Times writer Justin Wolfers, a devoted Democrat, admits this type of comparison and logic is complete "horsesh*t", claiming that "the Fed's short term loans cost us nothing when they are all repaid the next day."

Economist Richard Morrison told Fox News that "The Federal Reserve is lending money to banks and strategically purchasing assets, not handing over bailout payments to anyone. AOC's comparison to student loan payment is "inept."

A good number of Twitter users have also attacked AOC's nonsense declarations. User @dystopia_boring wrote: "That isn't just free cash, businesses do need to pay it back. And saying stuff like that and equating monetary policy with fiscal policy is bad. You should know better as an Econ major."


In fact, Alexandria Ocasio-Cortez did major in economics and international relations at Boston University in 2011. So, everything points out that AOC is feeling no remorse for lying to people even in these days of tension due to the rapid spread of the virus, which is now referred to as a "pandemic," with more than 135,000 cases and 5,000 deaths all around the world.

If she isn't consciously lying, that means her knowledge of economics is very poor and she needs to go back to college.