Pelosi: "Trump's Actions Have Cost The Lives of Many Americans" - Deadly Denial 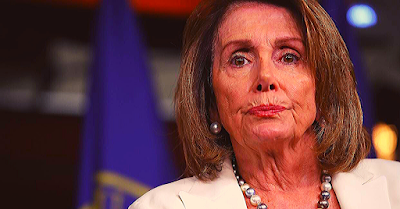 On Sunday, House Speaker Nancy Pelosi appeared on CNN's Sunday program, "State of the Union" hosted by Jake Tapper, to basically criticize Trump's handling of the coronavirus crisis that is hitting the country at this particular time, converting the US in the epicenter of the pandemic, which allegedly started in China in late December.


During her intervention, she considered Trump's actions as "deadly", claiming openly that Trump administration's delayed response to fight the virus has ultimately cost the lives of many American lives and he is the only one responsible for the situation the country is facing right now.

Pelosi's statements could clearly suggest a planned action to prosecute Trump for 'massive genocide', as other "law experts" had already hinted during public appearances with no remorse whatsoever.

Here's a transcript of the conversation between Pelosi and Tapper on Sunday morning:

HOST JAKE TAPPER: House Speaker Nancy Pelosi thank you very much for joining us, I hope you're well and saved, I know your home district is San Francisco, which has been particularly hard hit. President Trump is considering relaxing federal guidelines for coronavirus for the less-affected parts of the country. Do you think he should?


PELOSI: First let me say how sad it is that even since the president’s signing of the bill, the number of deaths reported has doubled from 1,000 to 2,000 in our country. This is such a very, very sad time for us. We should be taking every precaution. The president, his denial at the beginning, was deadly. His delaying of getting equipment to where it — his continued delay in getting equipment to where it’s needed is deadly. Now the best thing to do would be to prevent more loss of life rather than open things up because we just don’t know. We have to have testing, testing, testing. That’s what we said from the start before we can evaluate what the nature of it is in some of these other regions as well. I don’t know what the purpose of that is. I don’t know what the scientists are saying to him. I don’t know what the scientists said to him, when did this president know about this, and what did he know? What did he know, and when did he know it? That’s for an after-action review. But as the president fiddles, people are dying.

HOST JAKE TAPPER: Speaker Pelosi when you say the president’s denial was deadly, he obviously downplayed the risks of coronavirus for several weeks, and it wasn’t until I think about two weeks ago that he started acknowledging the gravity of the crisis. Are you saying his downplaying ultimately cost American lives?


PELOSI: Yes, I am. I’m saying that because the other day, when he was signing the bill, he said, just think, 20 days ago everything was great. No, everything wasn’t great. We had nearly 500 cases and 17 deaths already. And in those 20 days, because we weren’t prepared, we now have 2,000 deaths and 100,000 cases. So again, we really want to work in a unifying way to get the job done here. But we cannot continue to allow him to continue to make these underestimates of what is actually happening here. This is such a tragedy, and we don’t even know the magnitude of it because we do not have the adequate testing. Our first bill was about testing, testing, testing. The second bill was about masks, masks, masks. Of course, both of them were about addressing the emergency.

After these claims, CNN host Tapper proceeded to show the audience some recent declarations of New York Governor, Andrew Cuomo, in which he attacked, of course, President Donald J. Trump.