Rep. Ilhan Omar Is Not Paying Her Student Debt Off, Despite Her Luxurious Lifestyle 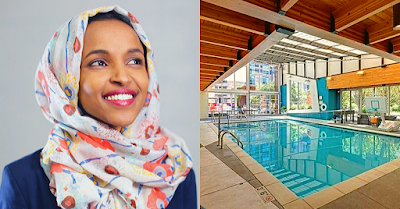 Representative Ilhan Omar (D-MN) owes, according to The Daily Wire news site, a significant amount of money in student loans, an amount that could reach up to $50,000 as of March 2020.


Omar, who obtained her bachelor's degree in political science and international studies at North Dakota University, admitted during a BET News Town Hall appearance hosted on September 2019 that one of the main reasons why she decided to run for Congress was for not having to pay her student loans off, something that up to this day she has refused to do.

"I am one of the 45 million Americans who owe student debt and it has been part of my journey and one of the main reasons that drove me to run for Office," Omar said during her appearance.

This is quite incomprehensible considering that she makes $174,000 a year for her seat in Congress, six times as high as the average American worker's salary, which is around $32,000 a year. But she is not willing to pay her debt off. She is waiting for Democratic candidate for the presidency, Bernie Sanders, to win the 2020 Presidential Election so that he eliminates $1.6 trillion in student debt, including her own.


Omar prefers to spend her money more "wisely" instead. She now lives in one of the most exclusive districts in the city of Minneapolis, in a three-bedroom apartment will all kinds of ostentations. According to The Daily Mail, Omar is paying for her apartment $2,860 a month, a penthouse that includes a movable granite island, a high-end kitchen with stainless steel pot racks, and a built-in wine rack. The building also offers a 14,000 sq. ft. private park and game area, a sauna, a large indoor pool, hot tubs, and a gym, among others.

"As someone who is part of the debt generation, I wanted to make sure that we were creating a proposal that would alleviate the kind of stress that people are dealing with, so what we are proposing is a simple cancellation of all debt, public and private," Omar said regarding the proposed legislation.