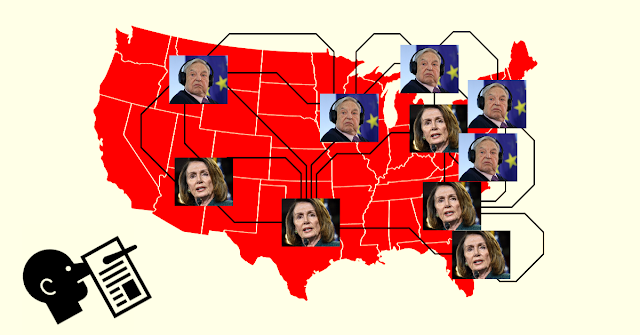 The main and most influential PAC linked to the Democratic party, Priorities USA Action, plans to spend in the next couple of months millions of dollars in ads criticizing the actions of President Donald J. Trump and all of them will be strategically targeted to residents of key states such as North Carolina, Florida, Michigan or Pennsylvania. All of this advertising will be financed by billionaire tycoon and Democratic supporter George Soros.


Specifically, Priorities USA Action spent $6 million last week on online advertising attacking Trump for his response to the nation's coronavirus pandemic, according to Washington Free Beacon. The ads were targeted to the states of Florida, Pennsylvania, Michigan, and Wisconsin. The PAC received no less than $3 million in donations from George Soros' Democracy PAC on February 21, according to new-released reports. This large donation by Soros constitutes 77% of the total collected by the PAC last month ($3.9 million.)

This is how powerful Democratic donors like Soros have been pouring millions of dollars into advertising to change the will of the people in the upcoming Nov. 3 presidential election.

Priorities USA Action has already stated that they plan to spend up to $150 million on anti-Trump advertising in Michigan and Wisconsin alone. PAC has managed to raise $27 million since January 2019. Its major donor has been billionaire financier Donald Sussman, who has given the organization $8 million during this time frame. In second place is Soros, who has donated $5 million to its cause.


But Priorities USA Action is not the only liberal group that is using the current coronavirus crisis to damage Donald Trump's reputation. PACRONYM, another influential PAC tied to the non-profit organization ACRONYM, which was responsible for designing the botched Iowa mobile application that led to chaos during the Iowa caucuses, is willing to follow a similar path.

PACRONYM announced Tuesday that they would spend $5 million on digital advertising against the Trump administration's efforts to fight the pandemic. Tara McGowan, the founder of ACRONYM, said different Democratic groups and organizations needed to get involved in this radical smear campaign against Trump. Democratic presidential front-runner Joe Biden has been harshly critical of Trump over the past few days, calling the Trump administration's work a "failure of planning and preparation" for the coronavirus.

McGowan's "non-profit" organization, which does not reveal the names of its donors, has received hundreds of thousands of dollars from House Speaker Nancy Pelosi's PAC. It also received funding from billionaire and failed Democratic contender Tom Steyer's PAC.


PACRONYM received $250,000 from Soros' Democracy PAC and $1 million from Sussman last year. Other celebrities have also helped the radical liberal group, with only Steven Spielberg and his wife Kate Capshaw donating $1 million.

In addition to Priorities USA Action and PACRONYM, other liberal groups are planning to sabotage the upcoming November presidential election. This is the case of David Brock's American Bridge PAC, which has also discredited, in many cases fabricating fake news, the figure of the president while politicizing the coronavirus crisis. American Bridge PAC has already run campaigns targeted to the states of Michigan, Pennsylvania, and Wisconsin -- key states to Trump's victory in the last election.

"Our job is to hold Donald Trump accountable, and we have no plans to let up, particularly with a focus on economic issues as we've done to date," Bradley Beychok, the president of American Bridge, said. "But as this crisis unfolds and the country experiences the consequences of his incompetence, we're not going to give him a pass for bungling the government's response to this pandemic.


In the case of American Bridge, they plan to spend $50 million just to distort Trump's figure in the Midwest. "We're now set to leverage our expertise to launch the largest persuasion media effort we've ever undertaken with the goal of making Trump a one-term president," Beychok said last year. "Donald Trump turned his back on the voters who gave him a lifeline in 2016. We plan to cut it."

Soros has also funded another project, called the Heartland Fund, which aims to change the will of voters living in the Midwest.