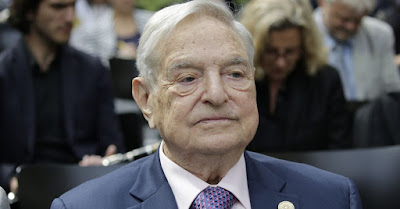 The Hungarian-born American billionaire financier and philanthropist, George Soros, announced during an event in the Swiss town of Davos that "President Trump is abusing his power of Office to take control of U.S-based social media platforms," according to politics news organization POLITICO.


During the event, hosted by himself, the American businessman talked about his most recent project called "Open Society University Network" or OSUN, a $1 billion initiative aimed to build a vast network of colleges worldwide to promote an innovative way of thinking called "critical thinking," preparing students from around the world for present and future challenges.

In his intervention, he also spoke about the current world political situation, mentioning the names of powerful political mandataries like Chinese President Xi Jinping, Brazil's Bolsonaro, India's Narendra Modi and, of course, he also dedicated a few words to U.S President Donald Trump, calling him a "narcissist" and "incompetent leader."


But Soros, a popular figure in the Democratic Party's circles, having donated millions of dollars to this party over the last years, went a step further. He claimed that Trump was an "extremely dangerous man" and a threat to the United States of America. He is convinced that Trump is using his powers as president to take control of social media platforms like Facebook or Twitter.

"Facebook will work to re-elect Trump and Trump will protect Facebook. This makes me very concerned about the outcome of 2020," said the investor to the audience at the meeting.

A few days later, a Facebook company spokesman later told POLITICO that "everything Soros said about Facebook is plain wrong."


This article was originally published in POLITICO. Read the original story here.