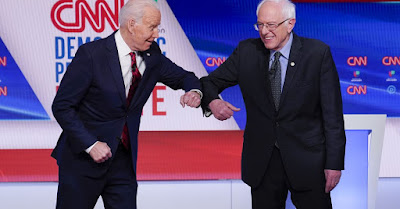 The first two-way debate between Bernie Sanders and Joe Biden in Washington, D.C., on Sunday night certainly left a good number of things to talk about, but what was clear for sure was that millions of Americans witnessed the incompetence of both Democratic presidential candidates.


It is already trending on almost all social networks the fact that they both accidentally confused the term “coronavirus," a topic of great relevance in yesterday's debate, with previous viruses such as Ebola (it was the case of Bernie Sanders) or SARS (in the case of Joe Biden.)

We can also highlight the gem that the favorite for the Democratic nomination, Joe Biden, left us. While he was discussing his plan to protect illegal aliens with coronavirus in the United States, Biden used the term "undocumented alien" during his speech.

Another setback for Biden was when he had a coughing fit during the debate and instead of covering his mouth with his arm, as recommended by the Centers for Disease Control (CDC), he used his hand, an act that did not go unnoticed and was heavily criticized by many experts.

In short, it could be said that what we saw yesterday was two old white people, one crazy socialist and another bordering on dementia, basically yelling at each other waiting for the other to say something foolish.


Well, this Sanders-Biden confrontation reminded many Twitter users of a 1993 movie, "Grumpy Old Men." In fact, Grumpy Old Men became a trending topic on the social platform right after the debate ended. Many of the tweets posted by users are actually worth reading.

Here are some of them:

Personally, I liked Grumpy Old Men so much better when it was Jack Lemmon and Walter Matthau. This remake is so unnecessary. #DemDebate
— Rich Zeoli (@Richzeoli) March 16, 2020

This debate is like a bad stereotype of grumpy old men.

When I seen Grumpy Old Men trending I knew it was about the debate.
— #NeverTrumper 🌊 (@horrorgothfan) March 16, 2020