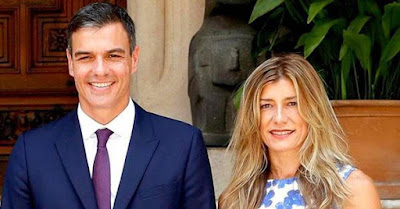 Spanish Prime Minister Pedro Sánchez's wife is infected with the coronavirus. Begoña Gómez has tested positive in "the tests carried out in the last few hours in Moncloa," according to official government sources.


According to these same sources, both the Prime Minister and his wife "are well." "Both are staying at the presidential residence of Moncloa and they are following at all times the preventive measures established by the health authorities," official sources declared in a statement released on Saturday at midnight.

Begoña Gómez participated last Sunday in the Madrid Women's Day demonstration, an act that has unleashed an enormous controversy since governments of other countries had already prohibited at that point the mass meetings to prevent the spread of the virus while the executive of the Spanish Socialist Party (PSOE) and Podemos (another leftist party) encouraged participation and brought their main female figures to the front line.

This same week, the Minister of Equality, Irene Montero, who is the spouse of second vice-president, Pablo Iglesias, tested positive for the coronavirus.

Following Montero's positive for coronavirus, the entire government underwent diagnostic tests to determine whether the virus had spread among the ministers. Following the tests, another positive case was confirmed, that of Minister of Territorial Policy and Public Function, Carolina Darias.

Both politicians are at home and in good health. Spain is now the second European country with more positive cases of coronavirus, with nearly 8,000 cases and 292 deaths.