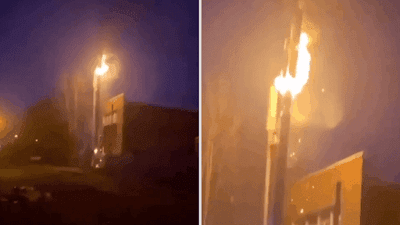 Multiple twisted conspiracies have emerged during the last weeks amid coronavirus' psychosis, a pandemic that has ended with the lives of more than 60,000 people worldwide, according to Johns Hopkins School data.


The latest of these unsubstantiated and illogical theories emerged late last month following the release of a video claiming that Africa had not been so badly hit by the effects of COVID-19 because "it's not a 5G region", meaning most of its countries lack 5G mobile connectivity, the fifth and latest generation of mobile phone technologies to succeed 4G.

This myth was quickly debunked by the World Health Organization, which also added that COVID-19 cases in Africa were already counted in the thousands.

Governments in several countries, including the United States and the United Kingdom, have also confirmed that "there is no evidence to suggest that 5G has anything to do with the spread of the virus.

Anyway, ignoring the authorities and scientific announcements, several English celebrities, like Jason Gardiner or Callum Best, have dedicated themselves to uploading publications where they claim that 5G can seriously affect the immune system in humans.

And as we know, we live in a time where the opinions of a handful of people with millions of followers on social networks can spread like wildfire on the Internet, to the point that dozens of masts have been deliberately burned in the UK in the last weeks.

Police and fire units from Birmingham, UK, found themselves in an inferno last Thursday night while watching a 70-foot-tall mast being engulfed in flames

The cause of the fire is still being investigated but both emergency services agree that the Birmingham fire was intentionally started.

The video of the fire was rapidly posted on Facebook, with hundreds of people uploading the most evil and despicable comments any person could imagine:

One user wrote: "Good needs to be done everywhere evil domination is coming."

Another said: "It is time to act now. Any 5g tower in your area burn it down! Collect people and stand and fight this. Act now before it's too late!

Others posted pictures of masts near their homes, while some users encouraged them to destroy them.


Most of the publications, comments, and interactions were uploaded to several Facebook groups, whose admins were forced to pin a post that said: "We have been notified by certain members of the public that some individuals in this group have decided to target telecoms workers, as they believe and claim them to be 'criminals and genocides'. You know who you are. If you continue to conduct yourselves like this you will be banned from this group."

It is interesting to notice that a lot of groups defined themselves as Anti-Trump or Anti-Conservative, established to bring down the 'current world order' and capitalism across all nations. Some of them contained photos of people burning the US Flag or photoshopped pictures where the users put the president of the United States in a coffin with his eyes closed.

It is thought that the "5G Coronavirus Theory" gained popularity last month after the publication of a video on YouTube, in which the authors supported the claims and which was has heavily criticized for spreading false information during a period of health, social, and economic crisis.

Those working in the sector claim that "there is a big collective" trying to destroy all 5G masts across the United Kingdom. An engineer also said to The Sun that "there were multiple radical Facebook groups posting videos and pictures of masts being set on fire while group members encourage others to do the same."

Mobile UK, the representative for companies like networks EE, O2, Three, and Vodafone, confirmed that some workers had been harassed over the false claims. The conglomerate was forced to publish an official statement that claimed:

"During this challenging situation, it is concerning that certain groups are using the COVID-19 pandemic to spread false rumors and theories about the safety of 5G technologies.

"More worryingly some people are also abusing our key workers and making threats to damage infrastructure under the pretense of claims about 5G.


"This is not acceptable and only impacts on our ability as an industry to maintain the resilience and operational capacity of the networks to support mass home working and critical connectivity to the emergency services, vulnerable consumers and hospitals.

"The theories are baseless and are not grounded in accepted scientific theory.

"The mobile industry is putting 100% of its effort into ensuring that the UK remains connected and our workers and the mobile operators have rightly been recognized by the Government as key to the national effort.