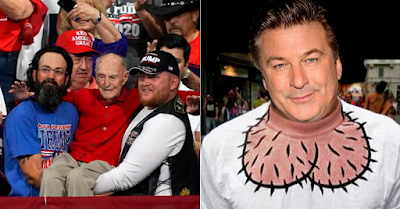 The HAB foundation's official Twitter account, set up by actor and producer Alec Baldwin and his wife Hilaria, posted a very offensive and despicable tweet on Wednesday, aimed directly to voters of President Donald J. Trump, in which Baldwin basically claimed that all of the president's supporters were, according to his words, "mentally ill".


The truth is that we don't know if Alec Baldwin was intoxicated or not but the tweet in question is full of hatred and anger:

"Trump has reached for, and nearly gained, a control of the federal govt unrivaled by other Presidents. He steamrolled the Congress, whenever possible. And now this. If you vote for Trump again, you are mentally ill," he said in the tweet.

Trump has reached for, and nearly gained, a control of the federal govt unrivaled by other Presidents. He fired huge numbers of govt professionals. He steamrolled the Congress, whenever possible.
And now this.
If you vote for Trump again, you are mentally ill.
— HABFoundation (@ABFalecbaldwin) April 8, 2020


But this is not the first time this Baldwin-managed account attacks the president or his voters. In fact, if you read the tweets posted on the account, you get the impression that it is a personal account and not a foundation's account for God knows what purposes.

Let's go back to the controversial tweet. What does Baldwin mean by "And now this"? The Western Journal points out that Baldwin was referring to Trump's recent announcement of withholding World Health Organization funds since Baldwin had retweeted from that same account an article harshly criticizing the president's action (probably from CNN or MSNBC.)


These were the words of Donald Trump during his daily COVID-19 press briefing about the World Health Organization:

Alec Baldwin retweeted and added: "This is the White House press secretary. If you are African American and vote for Trump, you are mentally ill."

This is the White House press secretary.
If you are African American and vote for Trump, you are mentally ill. https://t.co/F6TSO1R2im
— HABFoundation (@ABFalecbaldwin) April 8, 2020


McEnany becomes the fourth White House press secretary under Trump, after Stephanie Grisham announced on Tuesday that she was leaving her charge.

As most of us already know, Alec Baldwin has been a Trump hater since he won the presidential election in 2016. In January, Baldwin used his foundation account to send tweets blaming Trump voters for the alleged "desecration" of American ideals.

"It's Trump voters, particularly those who would re-elect him who bear the blame," the foundation tweeted.

"For the undeniable and colossal destruction of everything that matters to us as Americans that cannot be merely monetized."


We also can't forget that Baldwin impersonates Trump from time to time on the show "Saturday Night Live," portraying him as an incompetent and corrupt tyrant.

In short, it seems that Alec Baldwin has no regrets at all after calling more than half of Americans "mentally ill" and defaming the President of the United States.