Billionaire Pelosi Begs for $10 Donations for Her Re-Election Campaign 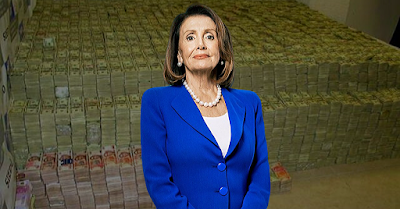 "Republicans are making it absolutely clear they want to unseat me. I refuse to let them attack our values. Can I count on you to rush in $10 before midnight to help me fight back? Thank you."


Despite having an estimated net worth of $250 million, House Speaker Nancy Pelosi (D-CA) published a video on his official Facebook account in which she asked for $10 donations to help fund her re-election campaign and continue in her seat for 2 more years.


The video in question, which lasts barely 13 seconds, shows a happy and radiant Pelosi speaking in front of a camera, with some people working in the background. This clip has received more than 100k reactions and 132k people have commented as of today.

The caption of the video says: "I'm humbly asking for $10 and your help before midnight. Donald Trump has smeared my Democrats and me with vicious lies. I refused to let his lies go unanswered -- but I can't do it alone. Can chip in before midnight and help me fight back?"

The video has fueled the fury of thousands of Facebook users from both sides of the political spectrum, criticizing the Speaker's lack of modesty, asking for small donations to people with perhaps limited economic resources while she and her family enjoy an estimated net worth of $250 million, according to different sources.

Pelosi's lack of modesty was seen again during her appearance in James Corden's show "The Late Late Show" last Monday. During her intervention, The Speaker, who was at the time in her chateau in San Francisco under self-quarantine, decided to show the audience how she had prepared for "surviving" the confinement, proceeding to showcase her wide variety of highly expensive ice cream pints, all of them contained in a large $24,000 fridge.


Pelosi's ice-cream assortment included pints from Jeni's, each one costing around $13, a relatively high price, especially for the average American, and some other sweet delicacies like a chocolate stash which could go for $68 per case.

"I don't know what I would have done if ice-cream had not been invented," Pelosi told the comedian. She later told Corden that she was "devouring" chocolate ice-cream and candy "as much as possible."

This is happening at a time when the United States is facing one of its most difficult challenges in history: The War Against the Invisible Enemy, against COVID-19. The Trump administration is trying to push an urgent relief package for U.S. small businesses, "the engine of our economy," as Donald Trump calls them. But things were not easy as Democrats refused to accept the conditions included in the package, delaying the aids to those businesses, which are the hardest hit, in such a crucial moment, when 22 million Americans have lost their jobs as of today. Now, fortunately, it seems both parties have just reached an agreement.

The Republican National Committee has already spoken out about the controversial Pelosi appearance on television:


"The Paycheck Protection Program ran out of money this morning because Democrats, led by Nancy Pelosi, blocked the necessary $250 billion replenishment for the program that Congressional Republicans tried to deliver," the Republican National Committee chimed in Wednesday. "Now 'Nancy Antoinette' has to explain to America why she chose to show off her luxury refrigerators and $13-dollar a pint ice cream collection from her chateau in San Francisco instead of funding the Paycheck Protection Program which has served millions of jobs all across the country."