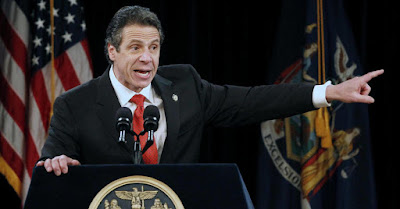 New York Gov. Andrew Cuomo revealed to reporters during his daily coronavirus press briefing on Saturday that the National Rifle Association (NRA) had filed a lawsuit against him for allegedly not respecting the freedoms the Second Amendment of the United States Constitution provides all Americans, in other words, the right of all U.S. citizens to bear arms for self-defense, something that is certainly serious, there is no doubt about it.


However, it seems that the governor of the state most affected by the pandemic, with a total of 4,758 deaths and 130,689 confirmed cases as of April 6 12:30 EST, doesn't seem to care much and jokes about it.

"I think I've been sued by the NRA, must be a dozen times. I didn't even know I was sued this time. You become sort of lawsuit immune," Cuomo said. "I wish you could become immune to this virus the way I've become immune to NRA lawsuits," he added during Saturday's COVID-19 press briefing.

The NRA has already made things clear to Cuomo on social media, posting a tweet that includes the video footage of Cuomo making such claims.

This is serious, @NYGovCuomo.

Your order is effectively denying millions of New Yorkers their right to defend themselves and their families...at a time when they need that right more than ever. pic.twitter.com/cZ4dOcYGoe
— NRA (@NRA) April 5, 2020


"This is serious Gov. Cuomo. Your order is effectively denying millions of New Yorkers their right to defend themselves and their families... at a time when they need that right more than ever."


The complaint was filed in the United States District Court for the Northern District of New York by the NRA on April 3, the day Cuomo declared gun shops as non-essential businesses, closing them down for the next few weeks because of the coronavirus crisis.

"There isn't a single person who has ever used a gun for self-defense who would consider it nonessential. This is clearly another assault by Gov. Cuomo on the NRA, on the rights of New Yorkers to defend themselves and their families, and on our Second Amendment freedoms. The NRA will continue to fight all such attacks until Gov. Cuomo recognizes that constitutional rights are for every New Yorker and every American - and not just for politicians and their privileged friends.


On March 28, 2020, the Trump Administration classified all gun retailers, shooting ranges and weapon manufacturers in the country as "essential" parts of the country's economic infrastructure. Michael Bloomberg and several other affiliated organizations, such as Everytown for Gun Safety, encouraged governors across the country to ignore Trump's guidelines.