Dem Who Endorsed Trump Resigns: "Me and My Family Have Been Attacked" 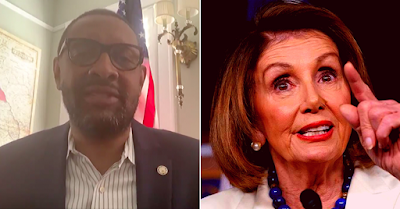 Rep. Vernon Jones (D-GA) has just announced that he is stepping down from his seat, after allegedly receiving a series of attacks and being harassed by his Democratic colleagues, just following his endorsement for President Donald Trump in the upcoming presidential election, according to the Daily Caller.


When Jones made public his position in early April, he became the first Democratic representative to support Trump, something that certainly did not sit well with Georgia's political establishment and, of course, his own party leaders, who began criticizing and disparaging him on social media, encouraging him to leave his seat in the House.

Finally, the Democrats, using threats and constant insults and attacks, succeeded in unseating Jones, who was forced to leave his charge as the representative for Georgia's 91st House District.

"I'm sicked and tired of me and my family being attacked and harassed by the Democrat Party for putting my country before my party," Jones said in a statement released Wednesday by The Atlanta Journal-Constitution.

"I take pride in being an independent thinker. I intend to help the Democrat Party get rid of its bigotry against Black people that are independent and conservative," Jones added.


The day Jones first endorsed Trump was April 14, citing his amazing handling of the nation's economy, his support for historically black colleges, and his efforts to reform criminal justice.

As we said, Jones was representing the 91st House District in the Georgia General Assembly, a highly democratic district. Jones was elected on January 9, 2017

His support for the president was the subject of such harsh statements as the following:

"He chose to stand with the racist president who has made an all-out assault on black Americans ... during the most important election of our lifetimes," Williams added.

Perhaps one of the factors that may have influenced his decision to support Trump was the racist policies advocated by Trump's next opponent in the election, Joe Biden.


"I endorsed Donald J. Trump, who lets Blacks out of jail, and they endorsed Joe Biden that puts Blacks in jail," Jones noted.

Although Jones is leaving his seat in the House of Representatives, he is not leaving the Democratic Party, explaining that he is doing so "to hold them accountable for how they are treating the black population in this country.

"I will remain woke and vigilant in educating and fighting for my people," Jones said with tears in his eyes.