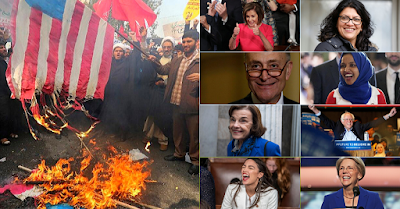 Sen. Ted Cruz (R-TX) vented his rage on his Democratic colleagues on Friday after Sen. Dianne Feinstein (D-CA) sent a letter to President Donald J. Trump expressing her anger and disappointment at his administration's plans to stop funding the Iranian regime, one of the world's leading promoters of terrorism. This letter, whose content is shared by most Democrats, did not sit well with Cruz.


"This comes at the exact same time that they are blocking desperately need relief to small businesses in America," Cruz said on his personal Twitter account.

Already in late March, a group of Democratic lawmakers - including Reps. Alexandria Ocasio-Cortez (NY), Ilham Omar (MN), Rashida Tlaib (MI), and Sens. Bernie Sanders (I-VT) and Elizabeth Warren (D-MA) - sent a letter to Secretary of State Mike Pompeo and Secretary of the Treasury Steve Mnuchin calling for a loosening of the sanctions imposed by the United States on Ali Khamenei's regime during the coronavirus crisis, a proposal that was never given much importance. Since then, Iran has been asking for $5 billion in aids from the International Monetary Fund (IMF). In response to the Trump administration's refusal to send such massive aid to Iran, Sen. Feinstein sent a letter Thursday, expressing her total disagreement with that decision.

"The coronavirus has hit Iran hard, with the potential for even greater spread in the region," the Democratic senator tweeted Thursday along with an excerpt from her letter. "In the interest of international security, President Trump should support Iran's request to the IMF for emergency funds to contain this virus."

"I am disappointed to see reports that your administration intends to block Iran from receiving $5 billion in humanitarian aid from the IMF to combat the coronavirus pandemic," the letter begins. "Providing these funds to Iran would help it respond more effectively to the disease and mitigate the risk of further destabilization in the region. Feinstein devotes the rest of the letter to convincing Trump to send those billions of dollars to one of the world's most evil regimes so that they stop asking for money from the IMF.

What has annoyed Republicans and other Americans the most is that this letter was sent and made public on the very day that Democrats blocked Sec. Mnuchin's "extreme need" initiative to increase the amount of money the country's small businesses would receive, from $350 billion to $600 billion.

"The Ayatollah leads chants of 'death to America'. He pledges to destroy America, which he calls 'the Great Satan'. And Senate Dems want to send him millions? At the EXACT SAME TIME, Senate Dems are blocking desperately need relief to small businesses in America.

The Ayatollah leads chants of “death to America.” He pledges to destroy America, which he calls “the Great Satan.” And Senate Dems want to send him millions??? At the EXACT SAME TIME, Senate Dems are blocking desperately need relief to small businesses in America. 😱 #Priorities https://t.co/o44wqG9bOm
— Ted Cruz (@tedcruz) April 10, 2020


According to the New York Post, instead of proceeding to accept the plan for urgently needed aid on Thursday, the Democrats demanded "issued partisan demands." For example, they committed to OK the initiative if it included $60 billion to community-based lenders serving minorities, women, non-profits and other groups. In addition, the bill had to include another $250 billion for cities, states, hospitals, food stamps, and other needs.

House Speaker Nancy Pelosi (D-CA) argued that "everything is an opportunity." This was an "opportunity" to address "disparities" that she says are plaguing the country.