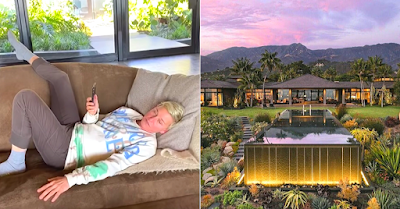 Television host Ellen DeGeneres has drawn once again lots of criticism after uploading a video from her mansion in Santa Barbara, CA, in which she basically compares self-isolating in her luxurious home to being in prison.


The mansion in question was purchased by the couple, Ellen DeGeneres and Portia de Rossi in 2019, and is a Balinese style resort located in the Montecito Community of Santa Barbara. The estate, which features 8.24 acres of land, 5 bedrooms, 10 bathrooms and luxurious indoor and outdoor spaces, a guest house, a fitness center, a cabana, and a basalt pebble infinite pool that overlooks the ocean, is priced at $40 million.

During her broadcast on Monday, DeGeneres appeared in her splendorous living room, cross-legged in a chair, wearing bohemian-style light clothes and began by thanking all those who were working on the front line - doctors, nurses, aides, firemen, police, truck drivers... - and then moved on to talk a little bit about herself, how she was living the lockdown and how she felt about being self-isolated in her paradisiacal mansion with her partner and her dog.

Ellen then dropped the bombshell that made her received criticism on social media, especially on Twitter:

"Wow, this is crazy. One thing I've learned from being in quarantine for 3 weeks now is that people - this is like being in jail, is what this is and - it's mostly because I've been wearing the same clothes for 10 days and everyone here is gay," the hostess said. "Oh the jokes I have today," she added.


After Ellen posted the footage on her Twitter personal account, users of the platform started sharing it and in a short period, the post reached millions of people. Many users harshly criticized her statements, especially at a critical time when prisoners are now considered at-risk groups during this Coronavirus outbreak.

"Oh, the jokes that you have... my son is in prison facing a high chance of getting infected. Yup, it's such a joke...," a Twitter user ironically wrote.

"She totally gets what it's like to be locked up on Ricker's for a parole violation and die from COVID-19 after being cooped up in a $40M mansion for three weeks," another user claimed.

"Ellen people who have incarcerated loved ones are scared for their health and for their lives. Your 'joke' about quarantine is not only not fun but also insensitive. Please consider that as you compare incarceration to living in your mansion," a user pointed out. 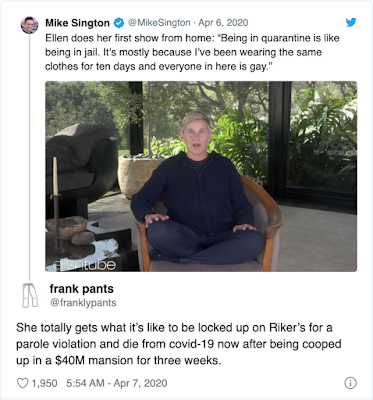 Do you think that Ellen DeGeneres has gone too far? Submit your opinion in the comments section below.