Silverman: "Trump Supporters Are Responsible for Thousands of Deaths" 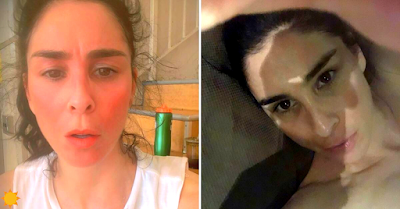 As we reach the third week of the coronavirus quarantine, the number of offensive celebrity attacks and comments on social media targeted at Trump and his administration continues to grow.

All of Hollywood (or almost all of it) has turned to an intense campaign of poisoned messages directed at the president, criticizing his handling of the country's coronavirus crisis.

We already know the hatred of some actors and filmmakers like Robert DeNiro or Michael Moore towards the president, but many other figures of the entertainment industry have already expressed their fervent rejection of the current federal government. One of the latest to do so is Jimmy Kimmel's ex-partner, Sarah Silverman or "Big S" as she is known to many of her fans.

Well, Silverman posted on her personal Twitter account a series of publications, featuring conservative politicians and representatives close to the president allegedly telling all kinds of lies and hoaxes, calling them "murderers" and claiming that they are directly responsible for the deaths of thousands of people.

But not only did he refer to Trump and his inner circle, but he also blamed his own voters, considering them "accomplices" and also holding them to some extent responsible for the current death toll.

She wrote: "These people are responsible for thousands of deaths. People trust them. And they will never take responsibility. Watch them rewrite history in front of our eyes. I don't think hatred is productive but it's what I feel towards these people. Hatred. Ugh."

These people are responsible for thousands of deaths. People trust them. And they will never take responsibility. Watch them rewrite history in front of our eyes. I don’t think hatred is productive but it’s what I feel towards these people. Hatred. Ugh https://t.co/ZERXstAbk4
— Sarah Silverman (@SarahKSilverman) April 4, 2020


We don't know what is worse, if the fact of publicly hoping the worst for more than half of the people living in this country because of their political views, or the fact of not realizing the seriousness of her words and not knowing the meaning of the word "hatred" at all.

The worst thing about this is that, as in all cases, these messages published on social media platforms like Twitter go unpunished, as if they were a mere insult or a simple opinion.

Silverman, you are wishing the worst on millions of people and blaming them for the death of thousands of others, perhaps friends or family of theirs. That's no joke.

As we said at the beginning of this article, many other show industry figures have expressed their "dislike" for the president's policies. Andy Lassner, who works for Ellen's show, was watching the COVID-19 daily press briefing on April 1 when he tweeted, "I'm sorry. I hate nobody. But, I hate him."

The funny and ironic part of this is that they're the ones calling for the president's arrest for "hatred" and "manslaughter." Yes, indeed, those who spend every day throwing darts loaded with threats and hatred for everything that Trump stands for and has done for this country.

Unfortunately for many of them, the opinion of those who voted for Donald Trump in the last election has not changed, in fact, his approval rating has increased significantly and they will most likely have to put up with Trump for another 5 years.