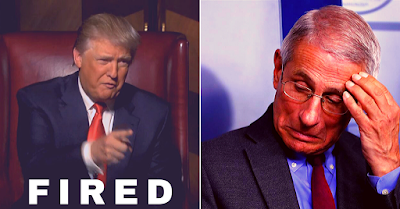 
"Sorry Fake News, it's all on tape. I canceled all flights from China before people started talking about this," the U.S. president wrote in response to Lorraine's entry.


In her tweet with the hashtag #FireFauci, the politician criticizes the specialist for saying that "if he had listened to the medical experts, Trump could have saved more lives. At the same time, he recalls that in February he had said that "there was nothing to worry about.

"On February 29, Fauci told people that there was nothing to worry about and that there were no threats to the people of the United States. It is time for #FireFauci (to fire Fauci)," Lorraine wrote.


Earlier, the epidemiologist appeared in an interview with CNN, where he admitted that if Trump had acted sooner, many lives could have been saved. "Obviously, you could logically say that if you had had a procedure in place and started mitigation earlier, you could have saved lives," Fauci said. "We make recommendations. Sometimes they take them, sometimes they don't. But now, that's what we have. That's where we are now," Fauci added.

On #CNNSOTU with @jaketapper, Dr. Anthony Fauci says that an earlier shutdown "could have saved lives" https://t.co/sG4EffrSUa
— State of the Union (@CNNSotu) April 12, 2020


Currently, the country is close to 560,000 positive cases of coronavirus, of which 42,018 have already recovered, and 22,146 people have died, making it the country with the highest death toll in the world, ahead of Italy and Spain. It is also important to note that 42.37% of total deaths-- 9,385 --caused by this virus are concentrated in the State of New York, the hardest-hit U.S. region by far.