WATCH: While Pelosi enjoys her fortune, here's a video of her district 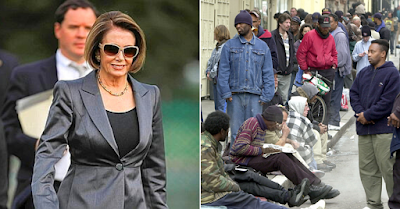 In late April, House Speaker Nancy Pelosi made headlines after appearing as a guest on James Corden's "The Late Late Show," during which Pelosi showed the comedian and his audience her large stash of high-priced gourmet ice cream well stored in his two refrigerators, each worth approximately $24,000.


The controversy arose because, at the same time that the House Speaker appeared on television showing her luxurious lifestyle in her San Francisco mansion, her party colleagues were sharply refusing to approve a package of measures aimed at helping small businesses in the United States, the country's main economic engine, and while 22 million American workers became unemployed due to the current coronavirus crisis.


However, Pelosi's lack of empathy and rudeness does not end here, as is obvious to most of us. Nancy Pelosi has been representing California's 12th Congressional District for over 30 years. Her salary, along with her successful investments in the stock market and her husband Paul's venture capital firm, makes her one of the wealthiest members of Congress, living a life of luxury and privilege that contrasts with the reality that thousands of residents of her own district — which comprises virtually the entire city of San Francisco, one of the most unequal cities in the country — have to face every day.

Drugs, crime, and filth have taken over much of the city's streets, mostly due to the housing prices in the Bay Area. In fact, the price of housing in San Francisco has skyrocketed in recent years by approximately 800% according to Business Insider, costing a two-bedroom, two-bathroom apartment as much as $1.5 million, a staggering amount of money.

According to the left-wing newspaper, The New York Times, there could be at least 18,000 homeless people in San Francisco. If these data are correct, we would be talking about the city with the highest number of homeless people per 100,000 inhabitants in the United States.


However, Nancy Pelosi does not seem to care much about these figures and continues to enjoy her great fortune and isolate herself from the reality around her. According to Bloomberg, the Pelosis had an estimated wealth of $202 million by 2014. But from where does this wealth come from?

Pelosi and her husband own numerous properties, 9, to be more specific, each of which has a great economic value. For example, they own a 16.55-acre vineyard in the village of St. Helena, northwest of Napa, California. The value of this vineyard is estimated to be between $5 million and $25 million.

Pelosi also resides in a 2,325-square-foot condo in the Georgetown neighborhood, Washington, D.C., 15 minutes from the White House, for which the congresswoman paid $650,000 in 1999, money she got from a donation by Paul Seagram to Pelosi's campaign. One could say, then, that Donald Trump and Pelosi are "neighbors".

And of course, we can’t miss her huge mansion in San Francisco. In 2007, the family acquired this complex for $2.25 million. However, its value has quadrupled since then, and currently "The Paul Pelosi Family Trust" - the official owner of the property - could receive up to $25 million from its sale.


The brick-red mansion was built in 1938 and covers an area of 3,332 square feet. The interior of the house consists of 4 bedrooms, 3 bathrooms, and a 420-square-foot basement, among many other things, of course. All in all, luxury at its best.