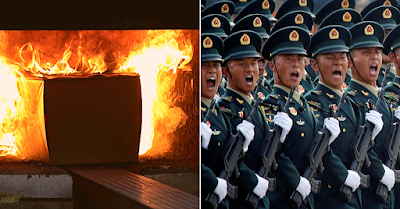 Numerous testimonies from residents of the city of Wuhan seem to indicate that there is enough evidence to suggest that extremely serious and inhumane acts have taken place in multiple funeral homes and hospitals in the capital city of the Hubei region.


In particular, many people, who prefer to remain anonymous, say they have heard screams coming from the crematoria of the funeral homes, and some patients treated in hospitals have seen the bodies of people who were seriously ill from COVID-19 being placed in plastic bags, while still moving their hands and feet, Radio Free Asia (RFA) reported on Monday.

The China-based news outlet wanted, however, to emphasize that they have not been able to independently verify that the Chinese Communist Party is or has burned coronavirus patients alive, nor has the Chinese Communist Party confirmed or denied such rumors. There is a growing suspicion that, in order to free up space in health centers collapsed by COVID-19 patients, health workers in Wuhan have chosen people who are least likely to survive (elderly people, or those with pre-existing medical conditions) and sent them to incinerators in spite of being alive and conscious.

RFA published the testimony of a witness working in the funeral industry in Wuhan:

"Some people are saying that ... there are video clips of screams coming from funeral homes, from inside the furnaces ... which tells us that some people were taken to the funeral homes while they were still alive," the witness said.

This person also discovered the existence of a video showing an elderly woman who had been treated at Wuhan hospital, allegedly for coronavirus. The video shows the lady saying that she saw with her own eyes how a patient, who was right next to her during her stay at Wuhan hospital, was put in a body bag despite the fact that he was clearly moving his hands and feet.

"He's not dead, his feet and hands are still moving," the woman says. "Wrapped him in a plastic body bag and zipped it up."

The woman also declares in the video that the hospital where she was treated did not have sufficient equipment to treat all the patients and that the man who was supposedly put in the bag would be in his late 70s.

"We, the older patients at the hospital were treated like dead dogs," she stated.

According to New Tang Dynasty Television, the woman spoke with a Wuhan accent, suggesting that she was raised and probably lived in Wuhan.

The news site Taiwan News managed to trace the footage back to a group of Chinese students calling themselves "Youth Production," who uploaded the video on February 24 and it began circulating on the Internet around that time.


Meanwhile, official Chinese government sources continue to publish numbers for positive cases and deaths from coronavirus that are quite questionable. China, a country with more than 1.4 billion people, the epicenter of the current global pandemic affecting 183 countries worldwide, now ranks 6th on the list of countries for confirmed positive cases: 82,783 confirmed cases and 3,337 deaths nationwide, most of which come from Hubei Province, Wuhan region, according to the Johns Hopkins School official website.

Numerous reports cite sources from various funeral homes in Wuhan who dispute these figures, estimating that the death toll in the city could be as high as 5 to 10 times the numbers given by the Chinese government. Sources close to the Wuhan funeral industry also offer a chilling statistic: official data from Wuhan's funeral homes indicate that approximately 30,000 to 46,000 people are cremated each week, which seems to contradict official data coming from the Chinese government of Xi Jinping.

For a long period of time, residents of Wuhan were not allowed to collect the ashes of their deceased relatives, a ban that ended two weeks ago. When the relatives of the coronavirus victims went to collect the remains, many of them came across some details that made them assume that those remains were not really from who they claimed to be. For example, as reported by the RFA, a resident of Hongshan district in Wuhan found a ceramic dental crown in the urn that allegedly contained his father's ashes, which was impossible because, according to the resident, "his father has never had such a thing fitted."