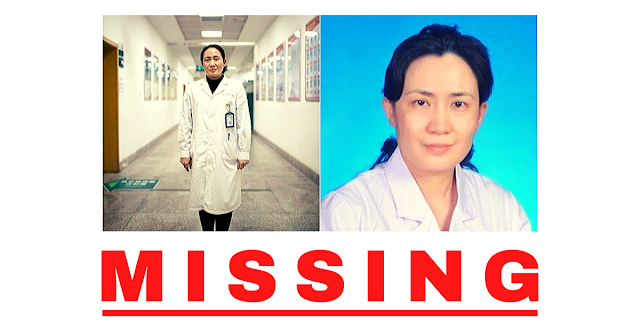 
"Just two weeks ago the head of Emergency at Wuhan Central Hospital went public, saying authorities had stopped her and her colleagues from warning the world," the Australian show 60 Minutes stated last Sunday.

"She has now disappeared, her whereabouts unknown," added the show as they showed photos from Ai's personal Twitter account.

Shortly after the show aired, a mysterious message was uploaded on Ai's Weibo account (Weibo is basically the Chinese version of Twitter) along with a photo taken from Wuhan's Jianghan Road.

"A river. A bridge. A road. A clock chime," the post said, the first on her account since March 16, when it was submitted a post thanking everyone for their concern about Ai and assuring them that she was in good shape, that she had returned to work as usual.


Ai had previously been punished for sending information concerning the evolution of the virus in Wuhan to a group of doctors, information that was published in an article - now deleted - in China's People magazine.

The article, titled "The one who supplied the whistle," told how Ai had been silenced by her superiors after publishing a photo showing the results of a test on a patient that circulated all over the Internet under the words "SARS coronavirus."

She alarmed her co-workers about the increasing number of positive cases of the virus, helping Ai later spread the word. Eight of her colleagues were subsequently arrested by the Chinese authorities. Among them was ophthalmologist Li Wenliang, who later died from COVID-19.

The RFA news site was unable to determine Ai's whereabouts. What it did find was that a large number of the detainees saw their personal accounts on various social networks updated, perhaps by others coerced by the Chinese authorities.

Concerns about Ai's whereabouts continue to grow as the confinement measures in the city of Wuhan are beginning to fade and after the visit of the Chinese President Xi Jinping to the region of Hubei, encouraging people to return to their respective jobs.


However, it seems that the coronavirus crisis has not vanished from Wuhan and officials are trying to fake the real number of cases. New cases are beginning to be reported from different sources, including asymptomatic cases that extend beyond Wuhan, such as those reported in Pingdinshan, located in Henan Province, nearly 300 miles from Wuhan.

A Hubei resident, Feng Jianbin, said there was widespread concern about new positive cases of COVID-19 in people who showed no symptoms, those who most rapidly transmit the disease.

"Asymptomatic carriers, as they're called, are defined by the government, who just keep on redefining the parameters and then say that there are no confirmed cases," Feng said. "The aim is mainly to cover up the reality."

The Caixin news site sent a statement to health officials, demanding the release of each and every asymptomatic case, which authorities do not consider to be “COVID-19 cases," despite having tested positive for the virus.


On Sunday, Xi visited several private businesses in the heart of Ningbo city, in Zhejiang region, located on the country's east coast, pleading the local government for help for small and medium-sized enterprises, those most affected by the pandemic.

The Chinese president visited a pier in Zhoushan Port (Ningbo) and an industrial park for automotive parts and molds in Ningbo's Beilun district to learn about the resurgence of productive activity in the area's businesses, according to the state-owned China Daily newspaper.

Xi publicly said that concerns about the spread and impact of the coronavirus needed to be "cushioned" by returning to work and reviving the country's production chains.