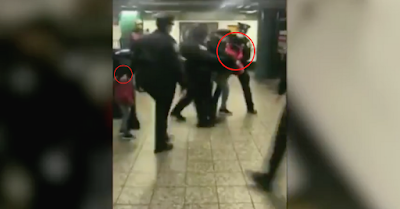 The 22-year-old woman, accompanied by her baby, reportedly refused to wear her mask correctly and was subdued after hitting a police officer's hand.


Mom placed in handcuffs after altercation with #NYPD & #MTA over not fully wearing her mask in #Brooklyn #NYCSubway station. Police say woman wouldn’t listen, but wasn’t arrested and charged, rather taken out of station. Courtesy: Anthony Davis on FB pic.twitter.com/nohs9NpuGj
— Dean Meminger (@DeanMeminger) May 13, 2020

NYPD is once again under fire after the release of a video, which has gone viral, showing a group of police officers allegedly subjecting a 22-year-old mother to excessive force on the subway.  According to the uniformed officer, the woman refused to wear the mask.


The NYPD identified the mother as Kaleemah Rozier, who was traveling with her toddler inside the Atlantic Avenue / Barclays Center station shortly before noon Wednesday. The video posted on social media shows the mother and her son wearing the mask, but not on their faces. Officials then proceeded to enforce the health ordinance and asked the woman to put on the mask.

Rozier can be heard screaming and cursing at the officers on the video as the officers remove her from the station. "Don't touch me," the woman says as she appears off-camera.

When Rozier struck the hand of one of the officers, the officers placed her on the ground and handcuffed her.

"She brought a baby with her, that's too much,” you can hear one of the witnesses say.

The NYPD spokesperson said the officers acted "appropriately and with respect," and that Rozier was arrested only after her behavior justified the action.


Rozier was charged with resisting arrest, disorderly conduct, and harassment.

Mayor Bill de Blasio condemned the confrontation in a tweet, where he also shared the video that sparked the controversy. "The use of masks is important to protect everyone - they are not optional. But no one wants to see an interaction turned into this. We've made progress with de-escalation. This isn't it. "

What do you think about the officers' response? Do you think they went too far and they could have solved the problem in a different, more subtle way?