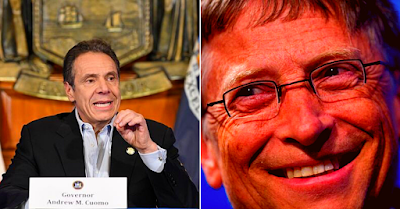 Amid the chaos of living with a pandemic, Bill Gates has managed to insert himself completely into the global battle against the coronavirus, proposing and working on the concept of developing a new vaccine against COVID-19, as well as on a project of enormous proportions that would aim to establish a system to detect, study, and track all the movements and actions of those who have successfully passed through the disease, and who have therefore developed antibodies against it. To accomplish this, the Melinda and Bill Gates Foundation proposes to implant microchips in the entire world's population, so that anyone can be tracked at any time and allowing everyone to access the entire medical record of any individual with just a few clicks on the computer.


However, Bill Gates is looking to go further and wants to take control now of the learning methodologies used in our children's schools, something that should concern more than one of us. On Tuesday, New York State Governor Andrew Cuomo said they intend to revolutionize the way our children learn, using new technologies, distance learning, and so on, with the help of the Bill Gates Foundation. This is what Cuomo said during his daily press conference:


“When we are reopening schools, let’s open a better school, and let’s open a smarter education system. … Bill Gates is a visionary in many ways, and his ideas and thoughts on technology and education he’s spoken about for years, but I think we now have a moment in history where we can actually incorporate and advance those ideas.”…”


When a powerful man like Bill Gates, not elected by the American people, tries to control the way our children learn, we face a worrying threat. Since the birth of our nation in 1776, the United States of America, a principle has prevailed that is now in danger: children who are not mature and old enough must be tutored by their parents, that is, it is the parents who must decide how their children should be educated, and not any technocrats or governments, either federal, state, or local.

The problem with Bill Gates is that he has not been elected by the American people to perform such a task, which of course goes against the freedoms on which our constitutional state is based.

If we allow Bill Gates to take over the education that our children receive; if we allow Bill Gates to self-accredit the creation of a vaccine and to promote its mandatory use, to implant microchips to control us at any time in our daily lives, then we will be in the hands of a handful of oligarchs who have no sense of nation or state and democracy as we know it today will subsequently die.

We all know John Lennon's song, "Imagine", written by himself and which seems to have become the anthem of the globalist agenda, albeit with a couple of modifications but keeping much of the lyrics and melody of the original song:

Imagine a New World Order
It’s easy if you try
No borders to hold us
Above us, only drones in the sky
Imagine all the people
Living with A.I.

You may say I’m a dreamer
But please call me Number One
I hope someday you’ll join me, Xi and Tedros,
And World War III will be won.