Feminist Author: "I Would Vote for Joe Biden If He Boiled Babies and Ate Them" 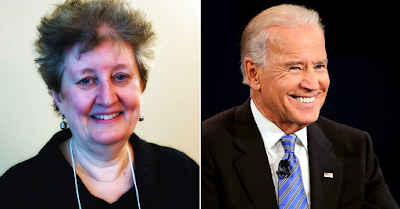 The essayist and columnist for the weekly left-wing magazine The Nation, Katha Pollitt, has just written an article on Tara Reade's case --you know, the woman who claims to have been sexually harassed by Joe Biden in 1993-- considering Reade's testimony as "not credible", a fabricated story, encouraging American citizens to stop paying attention to her story and vote "disastrous" and "evil" Trump out of the White House.


In fact, her hatred towards Trump is such that she even wrote: "I would vote for Joe Biden if he boiled babies and ate them."

This phrase appeared in one of her articles for The Nation magazine, published on May 20, in which she writes about Reade's case:

"We Should Take Women's Accusations Seriously. But Tara Reade's Fall Short. I would vote for Joe Biden if he boiled babies and ate them. He wasn't my candidate, but taking back the White House is that important," Pollitt wrote.

"Four more years of Trump will replace what remains of our democracy with unchecked rule by kleptocrats, fascists, religious fanatics, gun nuts, and know-nothings," Pollitt says.

"The Environment? Education? Public health? The rights of voters, workers, immigrants, people of color, and yes, women? Forget them. And not just for the next four years: A Trump victory will lock down the courts for decades," she adds.

"I cannot believe that a rational person can grasp the disaster that is Donald Trump and withhold their support from Biden because of Tara Reade," writes Pollitt.

Disaster? Are you talking about the economy or the lowest unemployment numbers in decades, Pollitt? Also, she unsubstantiated calls Trump all sorts of things related to fascist dictators, like “he’s a racist", "he doesn’t respect women", "he’s going to establish a dictatorship"...

Moreover, as CNS NEWS reports, when Kavanaugh was accused of sexual harassment in 2018 by Blasey Ford, whose testimony was, subtly put, not very credible, Pollitt wrote that it was a "credible allegation."

She also wrote: "Christine Blasey Ford has come forward with highly credible allegations of sexual assault that deserve a full airing and much reflection."


So, for the liberals of this country all women must be heard and believed unless the accused have the same ideology as them, being the #MeToo Movement a complete fake. Hypocrisy at its best.