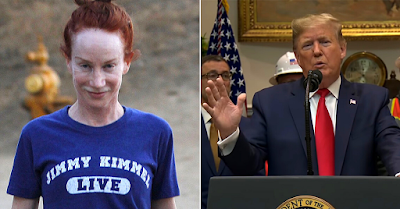 Comedian and actress Kathy Griffin has caused a stir on Twitter after her controversial and extremely cruel statements she made public on the social platform. It is no surprise that Griffin wanted to get some attention by mocking or threatening the president. However, this time Griffin goes much further.


This time, she explicitly wished the death of President Donald Trump in a tweet posted on his official account yesterday evening in which she wrote: "Syringe with nothing but air inside it would 'do the trick,'" followed by the words "F*CK TRUMP". [UPDATE: Tweet has been removed by Twitter.]

Syringe with nothing but air inside it would do the trick.

Griffin's controversial tweet was a reply to another tweet that CNN reporter Jim Acosta had previously published after a diabetes event at the White House. In that tweet, Acosta highlighted a phrase said by the president that was taken out of context: "Trump at diabetes event at WH: 'I don't use insulin. Should I be?"

But that's not the end of the story. After the tweet was published, the Washington Examiner news outlet posted a message on the social platform explaining to users the seriousness of Kathy Griffin's words and what consequences could have to inject someone with a syringe with nothing but air inside.

"Kathy Griffin advocates for someone to stab Donald Trump with a syringe full of air. Air embolisms, caused by air getting into the bloodstream, can be fatal," said The Washington Examiner.


Griffin, who was mentioned in that tweet, replied: "I SURE DID, FUCKER," Griffin replied, adding the hashtag #TrumpLiedPeopleDied.

As stated in federal law, anyone who physically threatens the president can face five years in prison.

Although Griffin's message went viral within hours, the social network Twitter has not imposed any sanctions on Griffin's account. In fact, the message continues to be public, as is Griffin's account, even though Twitter policies clearly state that violence against any person or group is strictly prohibited, including the glorification of violence, leading to the immediate removal of the offender's account.

As early as 2017, Griffin became the center of another major controversy when it was uploaded a photo showing her holding a mock Trump head in one hand while starring the camera.