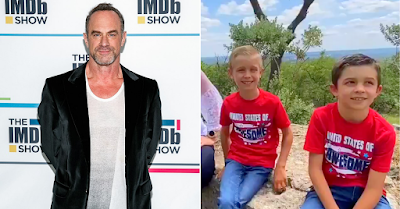 Christopher Meloni, an actor known for his role as Detective Elliot Stabler in the prominent television series "Law & Order" has sparked controversy in the last few hours for a tweet that the actor published on Sunday in which he attached a footage showing two kids, perhaps 8-11 years old, dressed in a red shirt with white stripes and red and blue stars symbolizing the colors of the United States flag, accompanied by the words: "United States of Awesome".

So. CUTE! Not since watching Nazi Youth newsreel footage have I felt this way. Heil Trump! 🖕 https://t.co/IC5YIqVuCY
— Chris Meloni (@Chris_Meloni) May 17, 2020


In the video of just under a minute, the mother says to her children: "I have good news for you. Do you know that there are only 100 days left until the national convention?"


"100 days!" replies one of the children. "Will President Trump be there?" asks the other. "Yes, he will be there! Isn't that exciting? - Do you like President Trump," the mother asks again.

"Yeah," both children reply. "Because he fights for freedom and he keeps us safe," they continue.

"He does fight for our freedom and keep us safe and that is the thing we're going to do - we are so excited about President Trump, because what has he done for the country?"

"We are stronger, we are tougher, we are winning, and we are keeping America First," exclaim the kids as the video ends.

Well, so this video has been the object of Meloni's despicable comments: "So cute! Not since watching Nazi Youth newsreel footage have I felt this way. Heil Trump!"

This tweet, full of hatred and evilness, has received 2,656 likes and 1,805 comments as of the time of writing this article. Are these comments coming from people who harshly criticize Meloni's words? No, quite the opposite.


If we start reading the comment thread of this tweet, we'll see some of the most miserable and shaky messages that one can find on the net. The user @mariana057 wrote: "These poor kids are gonna need so much therapy!!!"

Another user of the microblogging social network @AlexBrangwin replied to the tweet posted by the actor: "After world war 2 a LOT of nazis pleaded to occupying forces 'i was never with them'. Just remember their names, and make sure nobody forgets once trump is in prison."

After world war 2 a LOT of nazis pleaded to occupying forces "i was never with them".
Just remember their names, and make sure nobody forgets once trump is in prison.
— Alexandria Brangwin (@AlexBrangwin) May 17, 2020

As we can see, this individual goes even further, not only asking for the prosecution of Trump but also, if her twisted dreams were to come true, asking for those innocent children and their mother to pay for... their political beliefs? Now, we know who is the real "Nazi".
However, there is always room for hope and not all users "kissed Meloni's ass". Lots of them strongly criticized the comparison:

"The minute someone brings out Hitler reference, I know they're desperate," said one user.

The minute someone brings out the Hitler reference, I know they’re desperate.
— Pamela Giacinto (@PamelaGiacinto) May 17, 2020

"I don't like Trump either but these Hitler reference have to stop!  It devalues the absolute devastation Hitler and the Nazi party did. I was a Democrat but now an independent, and I'm on the fence for 2020, but its bullshit like this that makes me want to vote for him now," responded an outraged user who found Meloni's words and hateful comments about the kids and their mother disgusting.


Indeed, it seems that many of the radical liberals are desperate to find something to criticize and damage Trump's image, no matter what, either by claiming that Trump is a genocide, that Trump and his followers should be punished for manslaughter, that Trump supporters are indoctrinating their children, etc. etc. Something, of course, disgusting that should NOT go unpunished in any way.