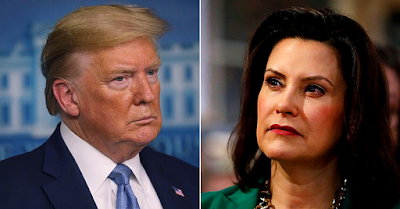 The coronavirus emergency is prompting changes to the election process of the different states. In the case of the democrat-ruled state of Michigan, those changes are just around the corner and they would directly affect the August and November elections in that state.


On Tuesday morning, Michigan Secretary of State Jocelyn Benson announced all registered voters in the state will receive an application to vote absentee, that is to vote by mail.

“By mailing applications, we have ensured that no Michigander has to choose between their health and their right to vote,” Benson said. “Voting by mail is easy, convenient, safe, and secure, and every voter in Michigan has the right to do it.” She believes that the majority of voters from both sides of the political spectrum approve this measure, claiming that “mailing applications to all registered voters is one of the ways that we are ensuring Michigan’s elections will continue to be safe, accurate and secure.”

Benson's opinion is quite different from that of many GOP leaders, including President Donald Trump himself, who has said on numerous occasions that vote-by-mail increases the chances of fraud and that people should get out to vote to their respective poll stations "in person". On April 8, Trump tweeted: "Republicans should fight very hard when it comes to statewide mail-in voting. Democrats are clamoring for it. Tremendous potential for voter fraud, and for whatever reason,  doesn’t work out well for Republicans."


Republicans should fight very hard when it comes to state wide mail-in voting. Democrats are clamoring for it. Tremendous potential for voter fraud, and for whatever reason, doesn’t work out well for Republicans. @foxandfriends

The decision announced by Benson will implicate mailing 7.7 million registered Michigan voters an absentee ballot application. Political Analyst Mario Morrow told 7 Action News that he expects the Secretary of State's Office in Michigan to face lawsuits even though he considers that mailing applications is actually a good, safe, and convenient move.


"Well, this was actually a no-brainer. It gives everyone an opportunity to vote, it should increase voter's participation, it gives the people the opportunity to actually do their research on the candidates, and because of the fear of the unknown we all know what would happen in the Fall without mail-in voting," says Morrow.

Morrow, who presents himself as an "unbiased" professional, despite having applauded the democrat rhetoric on various occasions, has an explanation for this fear:

"There is a possibility of fraud and that is people voting for people, we just have to make sure that those votes are counted effectively and efficiently. I think one of the problems the Republican Party might have is that this is going to increase minority voters' participation."

He also claims that there will be a legal barrier but he firmly believes that the Courts will eventually uphold the responsibilities and the duties of the Michigan Secretary of State. "It is in our authority, it's not prohibited, it's in our right to get this done," concluded Morrow.


This same morning, President Donald Trump has posted a tweet about this decision, claiming that "Benson's decision was done illegally and without authorization," adding that "he will ask to hold up funding to Michigan if they want to go down this Voter Fraud path"


Breaking: Michigan sends absentee ballots to 7.7 million people ahead of Primaries and the General Election. This was done illegally and without authorization by a rogue Secretary of State. I will ask to hold up funding to Michigan if they want to go down this Voter Fraud path!..

The application is available for download at Michigan.gov/vote, and at that website, people can also register to join the permanent absent voter list so they always have an option to vote by mail.