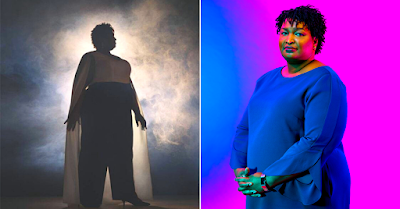 We all know Stacey Abrams, the former opponent of Georgia's Gov. Brian Kemp in the 2018 elections, in which she lost resoundingly, despite her later comments that the election was rigged from the early beginning.


Indeed, like many other Democrats Abrams has not yet accepted his defeat and continues to argue that it was due to a low turnout (false), the early closure of several precincts, thus not allowing several thousand voters to participate (fake, and also does not justify his defeat at all,) and last but not least, the argument that voting was impeded in those districts with a prominent African-American population (categorically false since according to the leftist opinion poll analysis site, FiveThirtyEight, more black people voted in the 2018 election than in the 2016 election. )

However, her view of herself as a progressive politician who wants to change the game rules and put an end to the great disparities between the American white and black communities, as well as her constant activism against Trump, has brought Abrams to the attention of the mainstream media, including the New York Times and the Washington Post.

In the case of the latter, an article titled "The Power of Stacey Abrams" appeared two days ago, exaggeratedly extolling the "virtues" of the political activist. In that article, there is a photo of Stacey Abrams that offers a lot to talk about.

But the funniest thing is when you start reading the article itself. That's when the magic begins:


"Young women stand on chairs, camera phones flash. Abrams, who appears both amused and slightly disturbed by the fuss over her, takes control of the chaotic scene...

Pandemonium ensues as she walks to the far left of the stage, like a runway supermodel, stops on a dime, poses, tilts her head slightly and smiles. Camera flashes explode. She next pivots and walks slowly to the center of the stage, freezes there, and repeats the pose. Again, the flashes explode. Abrams is summoning her inner actress, and she is both enjoying the moment and getting through it to get to the conversation. She then pivots and walks to the far right of the stage, same."

She's described, as you can read, as a "goddess" with supermodel-like qualities and an overwhelming charisma and attraction. In other words, the moment Abrams reaches a podium is like The Beatles entering a stage during the 1960s, that's what a reader would imagine after reading that particular article.

Just today, the New York Times published an article entitled "Stacey Abrams Wants More Than the Vice Presidency." Immediately one wonders: What is the loser of Georgia's last gubernatorial election up to? Is there any chance she will end up facing Trump in the November presidential election, having previously won the Democratic nomination without asking Democrat voters?

Look at how the author of this article describes Abrams during his appearance at the virtual Democratic convention in New Hampshire earlier this month:


The clapping hands appeared on the screen - one, two, a flurry of emojis - flashing under the Facebook Live feed of the former minority leader of the Georgia House of Representatives, Stacey Abrams. It was the socially distanced derivative of the applause she has often encountered in the past year or so, since her narrow loss in the race for governor of Georgia in 2018.

Ms. Abrams was addressing the virtual audience of the New Hampshire Democratic Party convention. She was there last Saturday to talk voter suppression, the focal point of her work since 2018, and by the looks of the comments, had found a receptive crowd. "Go Stacey!" popped one, then, 13 seconds later: "Stacy for VP!"

Well, you can draw your own conclusions but, from our point of view, it seems like a propagandistic piece of content that shows an image of Abrams that does not match reality, not even close. Later, in this same article, he talks about the 2018 state elections in Georgia and the author practically limits himself to saying that "Abrams could have defeat Kemp if some things had been made and more people had been allowed to vote... The characteristic idiocy of liberal journalists in this country that we will not analyze in this article.

There are rumors that Abrams could become Joe Biden's running mate, something she would accept as she has already revealed to different news sites in recent weeks. For instance, last month she told Elle Magazine that she would be "an excellent running mate." Also, when he appeared on the TV show "The View" he said that Joe Biden would be in big trouble if he didn't choose a black running mate, besides publicly supporting Joe Biden in the Tara Reade's case.

It is also important to highlight how dangerous this woman is, and I am not exaggerating by any means. A couple of weeks ago, Rep. Vernon Jones (D-GA) made headlines after his official endorsement of President Donald J. Trump, something surprising and which triggered a lot of hatred towards his persona and family coming from his own political party. He even said that, after making public his support for President Donald J. Trump, he was constantly receiving obscene messages and threats from different accounts linked to some Democrat political groups. Do you know who was the founder of all of those communities? Stacey Abrams herself, as reported by The Daily Caller.


I hope people come to their senses and vote this woman out in any future political election. Those articles reported by The New York Times and The Washington Post are quite shameful and reflect how unbiased and dishonest these news outlets are.

Do you think that Stacey's image has been extremely glorified by the Mainstream Media? Has she any chance of becoming Biden's running mate?