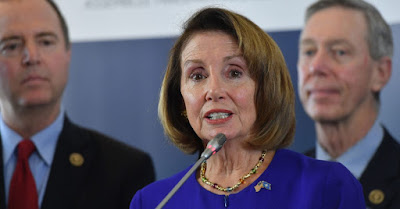 Rep. Guy Reschenthaler (R-PA) appeared on Breitbart News Saturday to discuss his efforts and discoveries during his own investigation on the flow of U.S. taxpayer money to the Chinese lab in Wuhan from which the virus allegedly escaped and infected millions of people around the globe.


During his appearance, Reschenthaler revealed some shocking information that would put Pelosi and House Democrats in serious trouble, having stated that they, the Democrats, weren't interested in holding the Chinese Communist Party accountable and, instead, what they decided to do was to keep focusing on new ways to harm President Trump, despite their failed and partisan impeachment process against Trump last year.

Reschenthaler said: "We should have an investigative body looking at these grants, but Nancy Pelosi is not going to do that. So you have myself and House Republicans. I can tell you I'm going to continue to look into these grants." He was making clear that he and some of his colleagues will continue to dig deeper into the Democrat's hating behavior towards everything Trump stands for.

But, which grants is he talking about? It turns out, there is a New York-based firm called EcoHealth Alliance, Inc. that received a grant, U.S. taxpayer money, from the National Institutes of Health (NIH), particularly from one: The National Institute of Allergies and Infectious Diseases (NIAID). Exactly, the organization ran by now-famous Dr. Anthony Fauci. Why EcoHealth Alliance would receive such a grant? According to Breitbart News, "for researching coronaviruses from bats flow out to the Chinese lab in Wuhan."


But House Democrats don't seem to care much about this issue, about the origins of the virus in Wuhan, China, or about where is spent the tax money from hard-working Americans. They just prefer to do what they do best, to blame Trump for the virus, for the thousands of deaths in the country, for all the troubles of the world.

Last week, Pelosi organized a committee conformed by 7 House Democrats. The aim of this committee is to oversee how the White House [Trump] spends the money allocated for coronavirus relief in the CARES Act, passed last month. In other words, it's a 7-member-team designed to destroy and crush The President and the "coronavirus" thing is just a smokescreen to convince people that they are doing "something".

However, there's little Republicans can do at this particular moment. As Reschenthaler told Breitbart News, the only way Americans can have The Congress to investigate the origins of coronavirus is that Republicans retake the House in the upcoming election, something that is quite plausible considering that Republicans would have to gain 18 net seats and there are currently 30 districts in the country represented by a Democrat where Donald Trump won in 2016.


Because of this, Reschenthaler reminds the American People of the importance of this election, stating:


“It’s imperative that we as House Republicans take back the House in this next election because Nancy Pelosi and the far-left Democrats are thwarting everything we do,” Reschenthaler said. “I do have to say I cringe when the media says ‘Nancy Pelosi and the Squad’ because that minimizes how far left this party has gone. It’s just not the Squad. It’s not just Nancy Pelosi. It’s most of their members. Look at the Green New Deal. When that was floated, half of their co-sponsors were on the Green New Deal. Most of these Democrats vote 90 plus percent of the time with [Rep. Alexandria Ocasio-Cortez]. This party has moved drastically to the left to the point of siding with the CCP over Americans. They don’t want to get to the bottom of these grants and they also don’t want my resolution run on the floor about defunding the World Health Organization or at least getting Dr. Tedros to resign and getting an international organization to investigate how the World Health Organization was either grossly negligent in dealing with the Wuhan virus or how they worked hand-in-glove with the Chinese Communist Party in trying to cover up the virus early on. But that’s the extent of their hatred, again, of this president and his supporters where they will not run these bills and they will not do these investigations because, again, they would rather side with the CCP than do the right thing.”