Pelosi claims A.G. Barr is dropping the case against Flynn to continue to cover up Trump's crimes 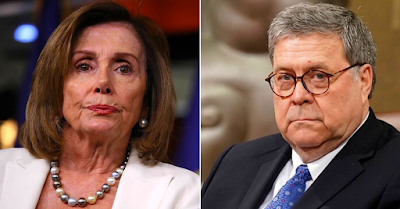 House Speaker Nancy Pelosi on Thursday made serious accusations against Attorney General William Barr of trying to cover up Trump's crimes after Barr announced that all charges against Trump's former national security advisor Michael Flynn were being dropped. Flynn was awaiting trial for allegedly lying to the FBI about his contacts with Russia, a plot that appears to have been fabricated by the Obama administration and which seriously affected President Donald J. Trump.


Pelosi said during an appearance: "The politicization of justice by Attorney General Barr knows no bounds."

"Michael Flynn pleaded guilty to lying to federal investigators in the face of overwhelming evidence - but now, Attorney General Barr's Justice Department is dropping the case to continue to cover up the President's crimes," Pelosi added.

It is indeed true that Flynn has in the past pleaded guilty to lying to the FBI about his contacts with Russia during the presidential campaign in 2016, but it is also true that this is not the first time an innocent person has decided to plead guilty, whether it be, for example, because of external pressures, lies, or threats by investigators.

Flynn later decided to withdraw his plea of guilty and has been fighting to prove his innocence ever since.

It was on Thursday that the United States Department of Justice announced that it was finally dropping the case against Mr. Flynn, considering that there was enough evidence to corroborate Lt. Gen. Flynn's innocence and that there was no longer a case to investigate.


That same day, Trump told reporters that he was very happy after hearing the decision made by the Department of Justice and that he wanted the people who filthily investigated his former advisor to end up paying a big price, accusing the previous administration of foul play.

"He was an innocent man. He is a great gentleman. He was targeted by the Obama Administration and he was targeted to try and take down a president, and what they've done is a disgrace, and I hope a big price is going to be paid," the President told reporters during a press briefing in the Oval Office.

"The FBI exists to investigate crimes. But in the case of Lt. Gen. Michael Flynn, it appears that they might have existed to manufacture one," said White House Press Secretary Kayleigh McEnany. "The interrogation of Michael Flynn was not an inquiry. Make no mistake, it was a trap."