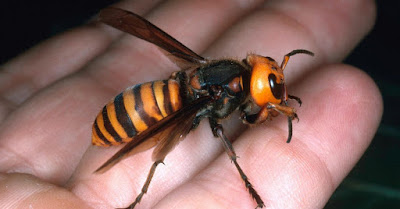 Beekeepers on the West Coast of the United States are warning the entire country of the presence of a species of hornet never seen before on American soil: the Chinese giant hornet.


The Chinese giant hornet, also known as the 'Chinese killer hornet' or 'Asian giant hornet', is a species of flying arthropod native to the Asian continent where it is known as the 'killer hornet', characterized by its extremely aggressive and belligerent behavior and its colossal dimensions with some specimens measuring up to 4 inches with a long, powerful stinger capable of penetrating beekeepers' protective clothing, the New York Post reported Saturday. In addition to their large size, they can be distinguished from other hornets by their brindle colors, with black and orange stripes and wings of the size of a common dragonfly.

In addition to being able to destroy beehives in a matter of minutes, these insects can also kill humans. While it is true that a sting from a Chinese giant hornet cannot kill a healthy adult, they typically attack in groups of several hundred, so the victim of an attack can be stung up to 100 times in less than a minute, resulting in certain death if not treated on time. It is known that in China alone, wherein many regions the inhabitants have already got used to living with these hornets, at least 1,500 people died last year due to the attack of Chinese giant hornets.

However, the real danger of this species is their destructive capacity, considered to be a highly invasive species, according to the New York Times.

In Washington state, several beekeepers have already reported the massive destruction of their beehives by these new and vicious visitors. The news site DNYUZ has contacted several of the hundreds of beekeepers affected by this new plague. One of them is Ted McFall, a beekeeper by profession and a passionate fan of bees, who treats them like his own children. One day, he went to visit one of his beehives when he came across a terrible scenario. Hundreds of carcasses of bees were scattered over the ground, honeycombs completely destroyed. His entire beehive complex had been wiped out overnight, literally.


"I haven't seen anything like it before," he said. "I couldn't wrap my head around what could have done that," McFall said with a feeling of great sadness and tears in his eyes. Later, Mr. McFall, after talking with several colleagues who had suffered similar damages, learned that the Chinese giant hornet was responsible for the massacre.

The authorities in Washington State are concerned, especially when we have to add to this the already devastating crisis of the coronavirus and at the time when agricultural activity is beginning to take off.

"This is our window to keep it from establishing," said Chris Looney, an entomologist working for the Washington State Department of Agriculture. "If we can't do it in the next couple of months, it probably can't be done," he added.

"If this plague of giant Chinese hornets begins to spread and establish itself, the losses in the agricultural sector here on the West Coast could be in the billions of dollars," said Washington State Department of Agriculture Director Derek Sandison.


Although the agricultural industry in the United States accounts for only 1 percent of the country's total GDP, agriculture generates about $200 billion annually and is essential to the financial subsistence of many regions and states in the country.