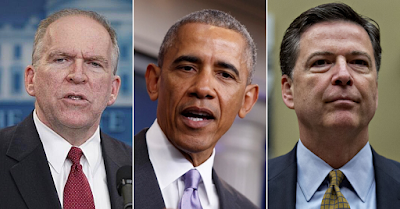 
Giuliani said during an interview on the radio show The Cats Roundtable that Barr was preparing to file charges against Comey for his role in the recently dropped case against General Michael Flynn, former security advisor to Donald Trump.

"I think they have Comey," Giuliani said.

Let's remember that in 2017, Flynn pleaded guilty to having lied to an FBI agent about his talks with the Russian ambassador to the United States. The justice department agrees with Flynn's attorneys that the interview with the FBI should never have taken place.

Former Acting Attorney General Sally Yates told Mueller's team that she and Comey did not agree on how the Flynn case should be handled, according to recently released notes.

Yates said she wanted to inform the future administration [the Trump administration] about the phone calls between Flynn and the Russian ambassador, but Comey flatly refused.

Yates admitted that she finally decided to tell the White House about it right after Trump inaugurated his presidency and called Comey to inform him.


It was at this point that Comey informed Yates that two FBI agents were on their way to the White House to ask Michael Flynn a couple of questions.

In 2007, Comey sent FBI agent Peter Strzok and Joseph Pientka to talk to Flynn. Comey later admitted that he violated White House protocol to manage to do that interview.

Giuliani describes Comey's actions as "close to treason as you can get."

Also, Giuliani talked about the controversial former CIA director John Brennan who, according to Giuliani, "orchestrated" the whole thing.

"They wanted to take out the lawfully elected president of the United States. And they wanted to do it by lying," Giuliani said.


"Submitting false affidavits. Using phony witnesses. In other words, they wanted to do it by illegal means," he added.

"What is overthrowing the government by illegal means? - It's treason," the former mayor of the Big Apple said.


Regarding this issue, which will be discussed a lot in the coming days, President Donald J. Trump has taken out his anger during different press briefings and through social media against the alleged architects of this whole plot, which many already consider to be a real coup d'état. Without mentioning any names, Trump spoke of "dirty cops" and "crooked politicians" and even recently wrote "OBAMAGATE!" in a tweet posted on his personal Twitter account a couple of hours ago, attaching a 9:32 minute video which corresponds to an excerpt from the Fox News show Tucker Carlson Tonight.