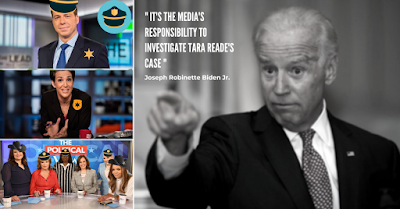 We all know the case of Tara Reade, a woman who was allegedly sexually assaulted in 1993 by Democratic presidential candidate (if everything goes according to plan) former Vice President Joe Biden. Although the case made headlines a couple of weeks ago, Joe Biden remained quiet about the case until recently, completely denying Reade's version and without offering any kind of explanation for it beyond saying, "No, that didn't happen."

This all seems like a complete farce: news outlets that don't report the case, #MeToo members who believe Reade but are going to vote for Biden anyway, Democrats trying to dodge reporters' questions about the case… What is happening here?


The truth is, this whole case looks pretty bad. But we are going to focus on a particular statement Biden made yesterday on ABC's Good Morning America show hosted by George Stephanopoulos, where Biden appeared for a brief interview.

In that interview, when Stephanopoulus asked Biden about the Tara Reade case, Biden said "It's the responsibility of journalists like you to go out and investigate the case." In other words, Biden is saying that all women should be believed but only if their testimonies have been investigated by the media beforehand.

"On these allegations from Tara Reade, I know you deny them, but you've also said that women should be believed. So what do you say to Americans who believe Tara Reade and won't vote for you because of it?" Stephanopoulos asked Biden.

"Well, that's their right. Look here, look, I think women should be believed. They should have an opportunity to have their case and state it just forthrightly, what their case is," Biden replied. "Then it's the responsibility of responsible journalists like you and everyone else to go out and investigate those. At the end of the day, the truth is the truth. That's what should prevail. And the truth is this never happened. This never happened, I assure you. That's the truth."


This is the real Joe Biden, folks. Since most of the media are not reporting this crucial issue - we are talking about the Democratic candidate for president - because they are all left-wing outlets that hate President Donald Trump, then Tara Reade is most likely lying. What cohesive logic Mr. Biden!

On top of that, Biden's belief that reporters should examine the testimonies of the various witnesses who have come out to defend Reade in order to reach a conclusion about their veracity is totally insane. Normally, a political candidate would have agreed to appear at a hearing as Brett Kavanaugh did a year ago or to encourage the relevant authorities to start an investigation into the case. In short, hypocrisy at its best, which is not unusual among democratic leaders in this country.